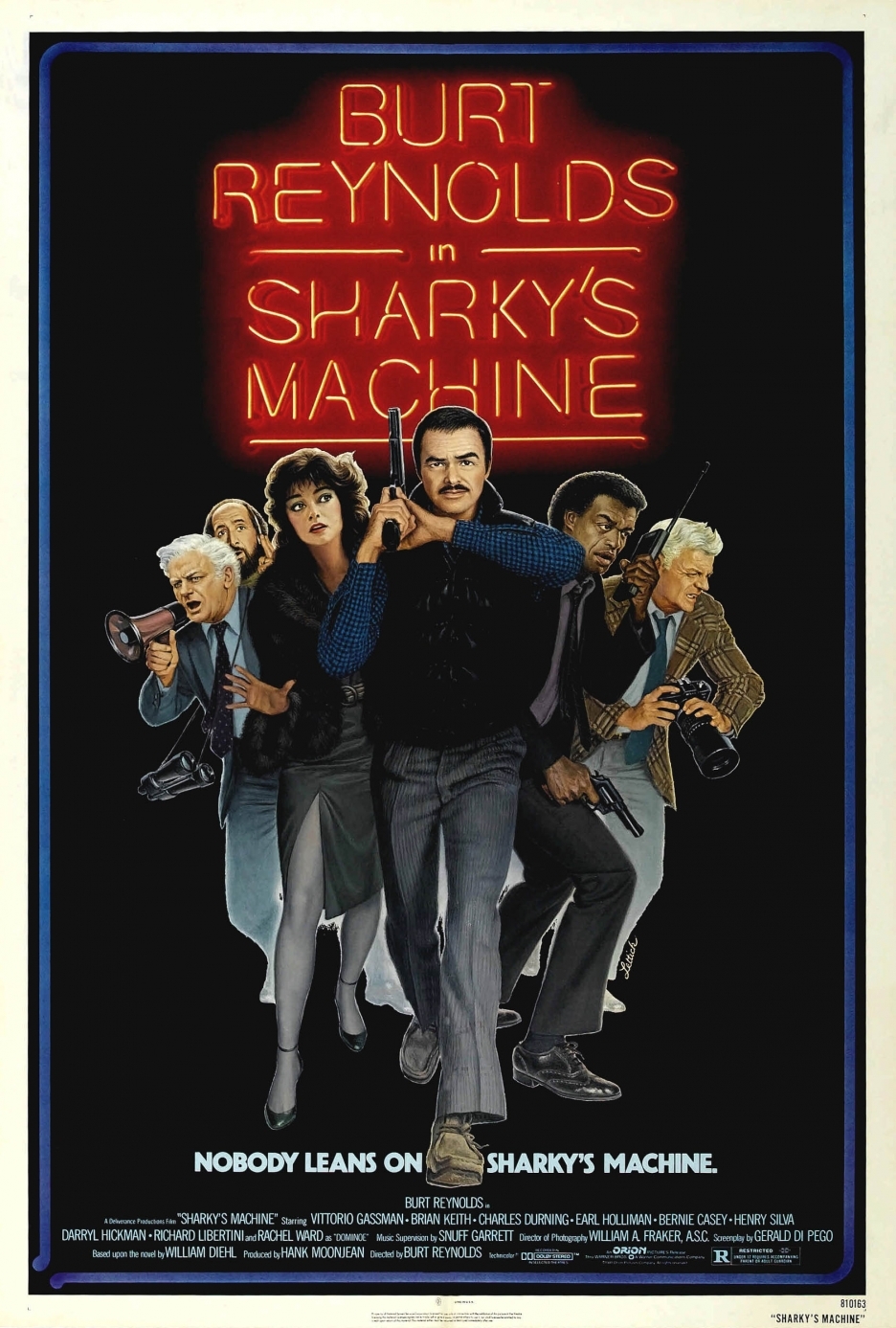 Though it was made in 1981 Sharky’s Machine feels very much like a 1970s crime thriller. It stars and was directed by Burt Reynolds, who was right at the edge of the height of his fame, within a few years he’d be box office poison. He plays Sharky, a loose-cannon narcotics detective who gets demoted after carelessly chasing a drug dealer and inadvertently getting a bus driver shot. He’s put on the vice squad, which within the context of this film is the dregs of the police department.

When he realizes that some high-class call girls are using names whose letters translate into phone numbers he talks his Lieutenant (Charles Durning) into getting seven wire tapes. He gets six, with one number gaining pushback from the higher-ups. Sharky figures there must be a reason for that, and that the reason is probably corrupt. He gets his friend Nosh (Richard Libertini) to run his own tap.

The phone belongs to Dominoe (Rachel Ward) and one of her clients is a candidate running for governor. This leads Sharky to set up 24/7 surveillance on the girl and sets up a lot of intrigues and ultimately murder for our film.

The plot is pretty standard crime drama stuff. Reynolds proves to be a steady hand behind the camera. He mostly plays it safe, but he adds a few things to the film to make it interesting. The middle section of the film is mostly him spying on Dominoe from a building across the street. He uses binoculars and telescopes to peek in her windows while listening to her through the taps.

Sharky develops a one-sided connection to the girl. The film connects them by cutting from him to her and back again, sometimes visually putting them in the same room together though in reality they are separated. Eventually, they do wind up actually together with Sharky protecting her from the killer (and always awesome (Henry Silva).

The trouble is that while he’s been watching her for days through his binoculars and listening to her every sound, she has no idea who he is. They scuffle and to Reynold’s credit, he doesn’t soften his character, allowing him to slap her around in his anger to find out more information on the killer. Later when she softens to him he leans in for a kiss but again to Reynolds’s credit, he has his character pull away and doesn’t force himself upon her. But naturally, in the very next scene, he shows his sensitive side and she’s all over him. They say the studio made him cut about twenty minutes from the film and the rumor is most of what fell on the cutting room floor was the development of their relationship, but as it is, she comes on way too fast.

It was also interesting to see Sharky get demoted for causing the bus driver to get shot. That scene is a pretty typical action scene, the type you’ve seen in a million cop action flicks. Something goes wrong in the bust and the bad guy gets away. Sharky chases after him, paying little attention to the collateral damage he might be causing. When the bad guy gets on the bus Sharky jumps on too. Then he shoots the guy in the leg causing him to shoot the bus driver on accident. In a million other movies Sharky would be hailed as a hero, but here his actions are seen as dangerous leading to demotion.

The best parts of the film are when Sharky is working with the rest of his Vice Squad compatriots (his “machine” if you will). The cast includes Brian Keith and Bernie Casey and the scenes with them trying to solve the casework really well. Reynolds has good chemistry with Rachel Ward too. But once things move from detective mode to action movie things get boring.

I was surprised by how much I liked this film. I’ve never been a huge Burt Reynolds fan and I watched Stick, which he also directed a few months ago, and mostly hated it. But he does well here. If you like 1970s crime movies with some neo-noir trappings then this comes recommended.