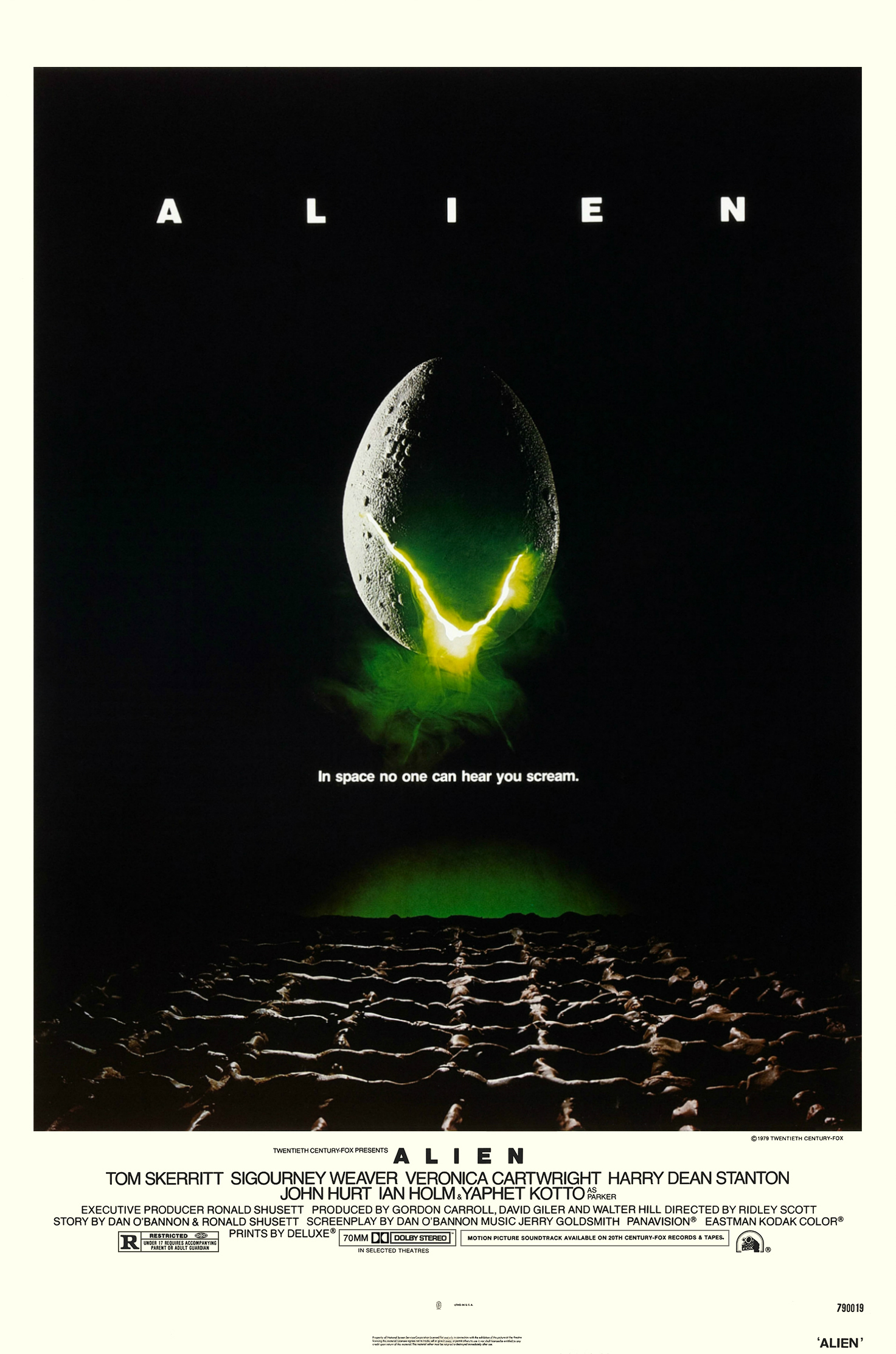 Each film in the Alien quadrilogy has differed from the other. It helps that they each had a distinctive and imaginative director. Ridley Scott created a slow, tension-filled science fiction epic. James Cameron pumped it full of adrenaline and made an action-packed masterpiece. David Fincher cut his teeth on Alien3 by turning the action into a dark, mostly muddled mess. Jean-Pierre Jeunet tried to rescue the franchise but had no story to work with. Like the Star Wars movies what we’re left with is a couple of top-notch flicks and a few others that – while showing a few moments of visual brilliance – ultimately leave the series limp.

But my review is not of the series as a whole, but on the movie that started it all. In considering the franchise it is sometimes forgotten that Alien never started out as a quadrilogy. There was only this one movie about a group of average workers sent to capture a monster. Scott does a superb job of creating suspense. It is some 30 minutes into the picture before we actually see an Alien. And even then the action is slow to evolve. For the audience, this creates a great amount of tension.

Even for those who have never seen an Alien movie, the creature has so penetrated our popular culture that everyone knows it’s not an ET kind of alien. So, while watching it we know that the it is creeping around some corner just waiting to devour the characters. And yet we hardly see it. We not only don’t get to see any alien through a third of the film, but when it does come out and begin its slaughter, we only catch glimpses of the creature itself. It is seen in the dark creeping inside a corner, or in a flash as it jumps out of the darkness to attack.

Scott, instead, uses shots of the crew to show the fear in their eyes, before their destruction, rather than show the creature in action. There are only one or two moments where the audience sees the alien in full figure, and those last only a short time. Even then the alien does not move, never allowing us to see it kill. This stroke serves to scare the audience even more. How many times have we seen a movie’s monster in action only to laugh at its poor design?

The movie oozes with atmosphere. The cinematography is dark and shadowy. The ship’s quarters are enclosed and tight, creating claustrophobic spaces in which to encounter the monster. Then there is HR Giger’s amazing design. His designs of the alien ship and the alien are absolutely perfect. The ship seems to slither and move as if it’s alive. There are curves, ridges, and smooth edges as on the alien itself. All of which create an atmosphere, and mood that stimulates the horror to come.

All of the effects shot were done in without the use of CGI. Generally, they still hold their ground. Sure, the glimpses we get of the alien standing look like a man in a rubber suit. But overall the effects look great. This is a testament to their genius of Giger. My main complaint is with MOTHER. Like other science fiction films the crew’s ship, the Nostromo has its brains in a giant computer. Here, MOTHER is housed in an inner room of the ship and only accessible by the ship’s captain. We see her captain, Dallas (Tom Skerritt) go to visit MOTHER for a “your eyes only” type deal. Why a commercial ship needs this type of security is never mentioned. Mother turns out to be a Star Trekesque computer equipped with blinking lights and a faint whirring sound. All of this is so that Dallas can sit down to a DOS prompt and ask silly questions like “What’s the story, Mother?” They should have gone with a more 2001 approach and had the crew be able to actually speak to MOTHER.

All of the characters are very well acted and fleshed out. Each character is given their own personality and is fully realized. There is a nice scene in which the crew is searching for the recently non-sucking face sucker as it has disappeared. Ripley (Sigourney Weaver) has left the door open and Ash (Ian Holm) moves to shut it so the alien won’t escape. The look Ash gives as he is doing this is incredible. Ash and Ripley have previously had a bit of a fight and you can see the anger and irritation at Ripley perfectly in Ash’s face.

Sigourney Weaver plays Ripley beautifully. This is a female action star that is sexy but doesn’t pander to her sexuality (though they did manage to get her in her underwear.) She is tough as nails and intelligent. And Weaver plays her perfectly.

Alien is arguably the best in one of the most successful series in film history. It is also one of the best science fiction films Hollywood has ever made.