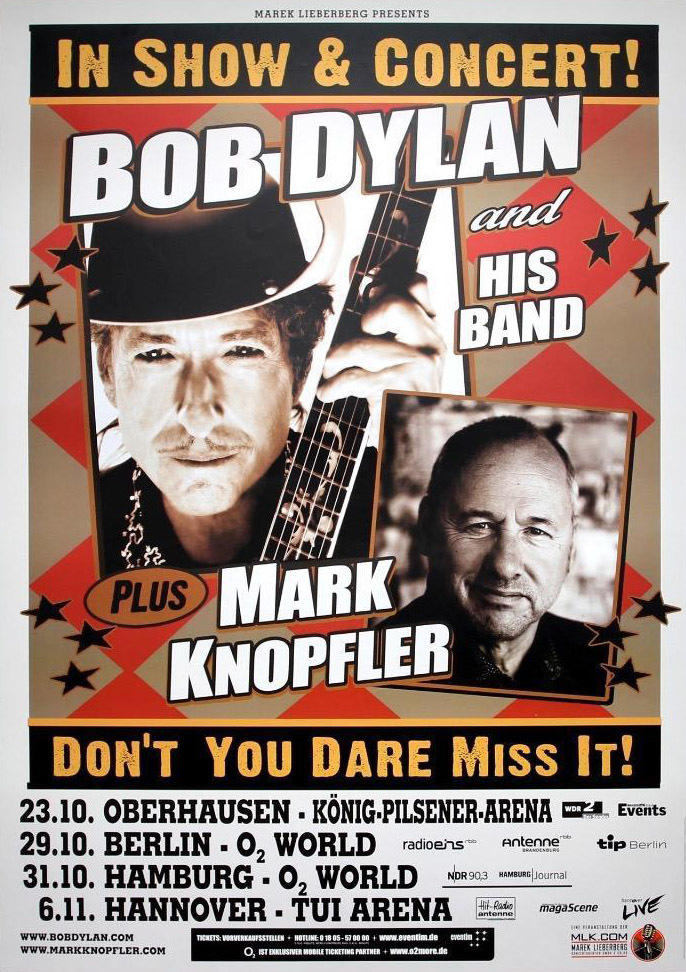 Leopard-Skin Pill-Box Hat
Don’t Think Twice, It’s All Right
Things Have Changed
Tangled Up In Blue
Beyond Here Lies Nothin’ (Hunter/Dylan)
Spirit On The Water
The Levee’s Gonna Break
Desolation Row
Highway 61 Revisited
Forgetful Heart (Hunter/Dylan)
Thunder On The Mountain
Ballad Of A Thin Man
*
Like A Rolling Stone
All Along The Watchtower

Here is the start of the tour for your pleasure
Courtesy of SPOT
As I have said before I AM NOT SPOT he is a good friend who
sends me these things to upload. Hopefully there will be more

SO
This is a SPOT recording (thanks again as ever) and the equipment used was: Core
Sound High End Binaural (HEB) DPA 4061’s with Edirol by Roland R-09.

I have two sources for this show, you can read the info here.

A ‘rough transfer’ version of this recording was circulated to a limited circle of Bob collectors in May 2011 on the understanding that it not be torrented or further shared.
This version supersedes that earlier one. It is a new transfer made with a superior sound card and noticeably improved sound quality to the ‘rough transfer’ version.

(This concert has been documented in certain places as occurring at Darling Harbour, Australia. Darling Harbour is a location in the inner city of Sydney.)

I have three sources for this show, you can read the info here.

I have two sources for this show, you can read the info here.