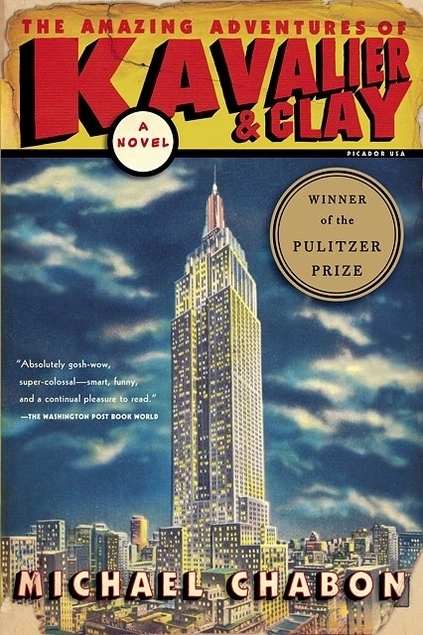 I finally tried my hat at doing a full book review with Michael Chabon’s 2001 Pulitzer prize-winning book. I’ve never reviewed a book before, so let me know how I do.

I started reading this book in February or March of 2003. For one reason or another, I was only a couple of hundred pages into it when it was due back to the library. As is usual with me, I decided to give up reading it and turn it in, rather than recheck it. This is not a comment on the quality of the read, but rather a quirk in my own existence. I was fairly busy at the time and I figured that if I only made it through 200 pages in the first three weeks, another three weeks wouldn’t get me to the end of this 636 paged tome. Finding it in the library here, I decided to pick it back up. I’m glad I did and grateful I managed to finish it this time.

Chabon has created a magical book. It is slightly based on the history of comic books, and is partly a fictional account of a small group of Jews during the atrocities of Hitler. Though, as Chabon admits, he chooses to ignore facts and history as it suits his story. It is the story of the friendship between Joe Kavalier and Sam Clay. The story begins with Joe having fled Nazi-run Prague for the comforts of his cousin Sam’s comfortable apartment in Brooklyn. They quickly become great friends and enter the burgeoning comic book world.

Chabon writes beautifully crafted sentences.  The plot courses forwards and backward through time to tell a multi-faceted story. His pen pauses in moments of time during the present and pulls the reader into a back story of Prague, the Kavaliers, and comic books. Joe Kavalier’s story is beautifully told, encompassing a stint as a magician and escape artist before traveling from Prague to New York by way of Asia and California. The story of how Joe traveled to New York by way of a golem-filled box is hilarious, frightening, and poignant. For the first 2/3s of the book, Chabon’s pen doesn’t let the reader down from its magnificent beginning.

Yet it is about 2/3s of the way in, that the story begins to falter. In an effort to tell a grand, epic story, Chabon treads beyond the beautifully told past, and magnificent present, into a less than glorious future. Seeing his characters rise from humble, troubled beginnings to a stellar, triumphant present, only to have them fall again was a mistake. It’s not so much the fall that hurts the story but the rushed way it is told. The novel moves at a slow pace, giving many sumptuous details and never minding to slip into the past for a revealing story. Yet, when it moves to the future it seems to force things along. You can feel the writer telling his story to point towards his final concluding point, rather than just allowing the story to unfold. To really flesh out the future section he would have needed another few hundred pages. I would have preferred him to wrap up the story by leaving out the future scenes. He does manage to salvage the conclusion and bring his characters into fully realized beings.