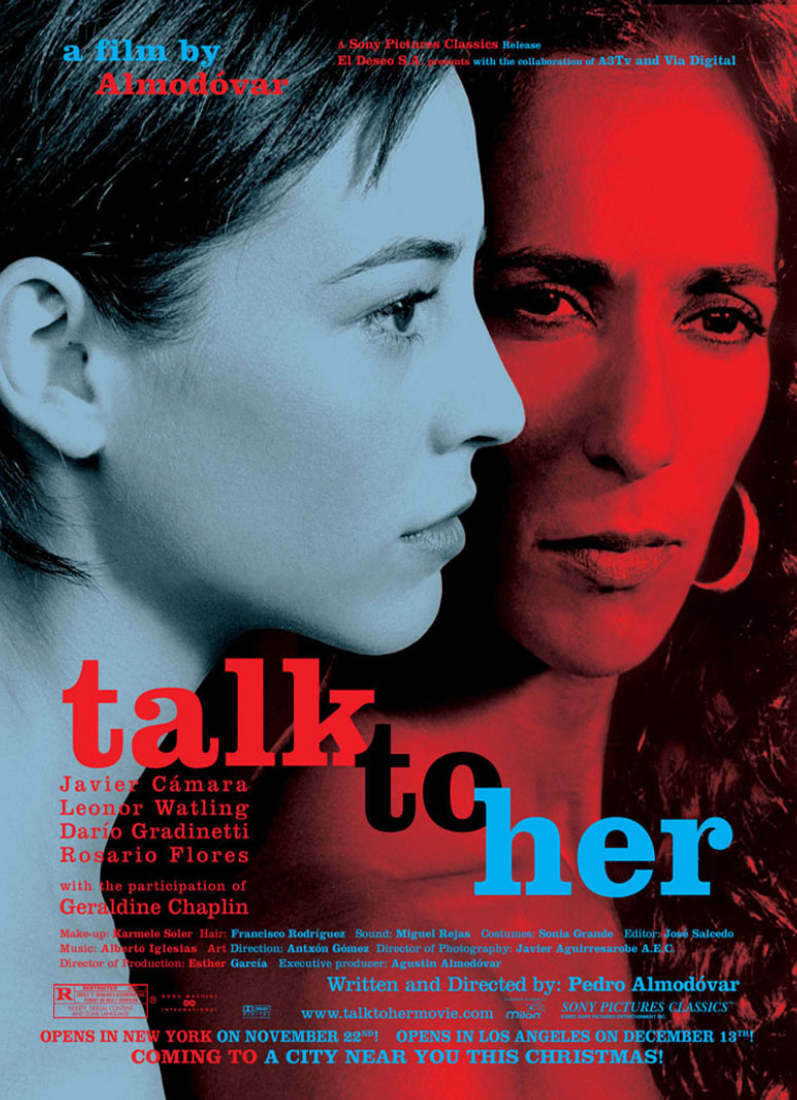 A friend of mine recently lent me her Chinese bootlegged copy of Talk to Her. I have seen a few other Pedro Almodóvar films and expected another tale filled with bizarre violence and kinky sex. What I wasn’t expecting was a rather moving tale of unrequited love.

Talk to Her reminded me quite a bit of the films of Todd Solondz. Like his movies, this film manages to make characters who commit rather heinous acts quite sympathetic. Equally alike, Talk to Her deals with the immense loneliness of its characters.

The story begins with a chance meeting between Marco (Dario Grandinetti) and Benigno (Javier Cámara) at a dance recital. Neither man knows the other, but they happen to have seats that are side by side. They later meet again at a private hospital, where Benigno is the caregiver to a beautiful dancer, Alicia, who has been comatose for several months. Marco is there visiting his girlfriend, a bullfighter who was recently gorged by a bull and is likewise comatose. A friendship builds between the two men, as they care for the women they love, though they cannot be loved back.

The film’s title comes from Benigno’s insistence that Marco speaks to the women as though they could hear him. He urges Marco to open up and tell his lady the intimate details of his life. Benigno is deeply in love with Alicia and treats her as if she was his lifelong lover, though she cannot respond in any way.

The film is very subtle and nuanced in meaning. Both men, though apparently quite heterosexual, spend most of the film in more standard feminine roles. They are the caregivers: washing, cleansing, and taking care of the women. Benigno is a male nurse. They become very good friends, and indeed seem to love each other deeply, yet they are hopelessly devoted to women who are deemed hopeless, doomed to never awaken from their coma.

Neither Benigno or Marco really knew these women in their waking lives. Benigno watched Alicia in her dance classes, from across the street, through his window. Marco had just recently met Lydia, interviewing her for a magazine, and finding the beginnings of romance. It is really only through their caring for these women while they are asleep that they begin to feel love for them.

Almodovar is careful to portray the characters as sympathetic while still tainting their devotions with something sinister, something perverse. As the stories conclude, one character’s actions become slightly horrific, and yet we still feel sympathy for him. Almodovar understands life’s complications and that it is too easy to broadly label people as one thing when reality goes much deeper.

In keeping with the kinkiness of his prior films, Almodovar throws in a sequence with Benigno retelling a silent film he watched recently. It rivals the bathtub scene in Tie Me Up, Tie Me Down, and inside the cheerleader’s pants scene in the USA Up All Night classic, Getting Lucky. Let’s just say for lovers of perverse, whacked-out cinema, it is a must-see.

Ultimately, Talk to Her is a bizarre, but moving portrait of unrequited love, friendship, and the complexity of human life. It is undoubtedly a difficult film emotionally, but one definitely worth sitting through and contemplating.