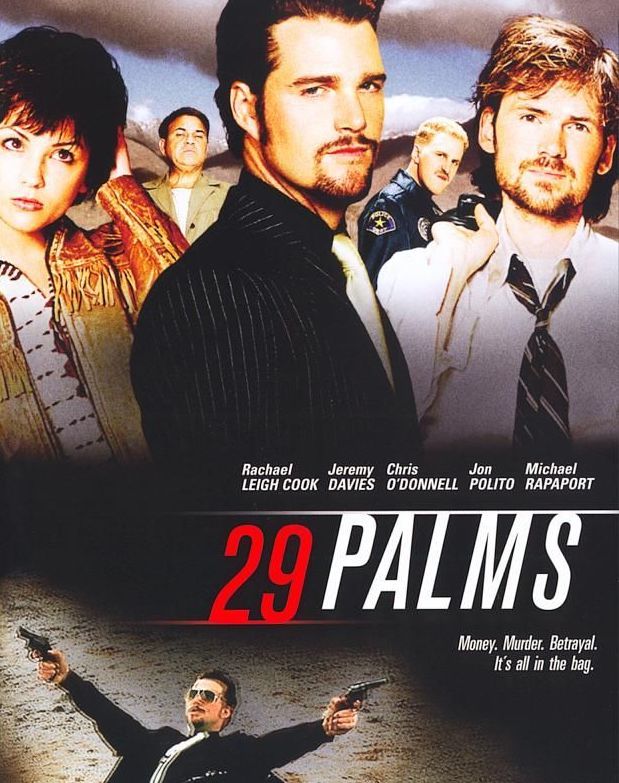 About 3/4ths of the way through 29 Palms an inept security guard (Jon Polito) says, “Nobody thought I’d do that, did they?” In a way, this line could sum up the entire plot structure of the film, for it seems the filmmakers want nothing more than to surprise the viewer at every turn. They seem to be wearing a smirking smile knowing they are coming up with something different, something no one would expect. Yet, in spite of all the twists, turns, and quirkiness, it all feels like something I’ve seen before.

It is as if, while attending film school all of the filmmakers heard over and over again to avoid clichés and then skipped class the day originality was discussed. As if the avoidance of redundancy is all that it takes to be interesting.

To say something nice, it is filled with lots of great character actors like Michael Lerner, Michael Rapaport, and Jeremy Davies and they do manage to rise above the lackluster material.

Davies plays an unnamed drifter who starts the film as a clerk for a corrupt judge (Michael Lerner) and may or may not be an FBI agent. The judge is about to make an important decision on whether or not an Indian Casino can expand. The judge hips the Native Americans onto the drifter and they promptly kill his girlfriend. A hired killer (Chris O’Donnell) is turned loose to do the same to the drifter.

The killer contract includes a bag of money and a severed hand (which is apparently from an enemy of the Native Americans and is to be used to frame someone, but it’s all fairly vague and unclear.)

The inept security guard steals the bag which is in turn stolen by a corrupt cop (Michael Rapaport) and then again stolen by the drifter (who somehow knows about the bag, though this too is also vague and unclear).

The remainder of the film centers on all of these characters (and more!) trying to get their hands on the bag. There are quite a few plot turns and the characters are all quirky and indie-friendly, but honestly, by the midpoint I stopped caring enough to write it all down.

If the filmmakers had stopped trying to make everything so original and quirky for a second and worked on their stories, and maybe developed a couple of their oddball characters, it might have worked. But instead, we get a film that may be “different” but it never makes me interested enough to care.