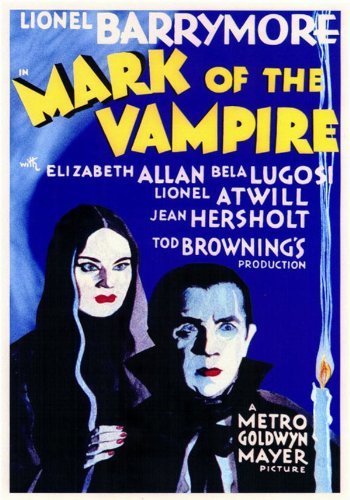 Thanks to tometheridge57 for recommending this one to me. Directed by Todd Browning, who had helmed Dracula just four years earlier Mark of the Vampire is another film where Bela Lugosi stars as a bloodsucker.

The story, frankly, isn’t that interesting. It involves a gothic castle, some folks showing up dead with bite marks on their necks and blood drained from their bodies, and a professor who has come to investigate the matter. There is a plot twist in the final act that I won’t spoil but that I found rather unappealing. But it oozes style and gothic charm. The castle sets are fantastic and the monster effects are quite wonderful.

Legosi doesn’t have that big of a role, but he’s wonderful, even if he is essentially reprising his role as Dracula. Lionel Barrymore plays the professor and I have really come to love him in just about anything he does.

So, if you’ve seen all the Dracula movies but still need a Legosi as vampire fix, this movie is for you.