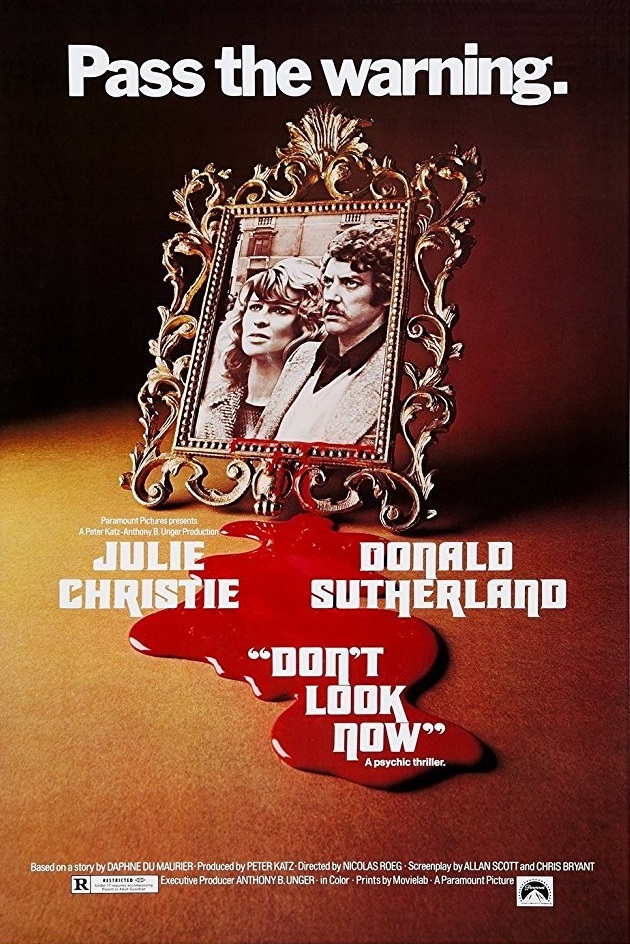 I recently read a short story collection by Daphne du Maurier which contained the story upon which Don’t Look Now is based so I thought it would be fun to rewatch the film. Truth be told I started it several days ago, when the calendar still read September, but I had to pause it and didn’t return to it until this past Sunday. But since it can be considered a horror film I’m counting it for my 31 Days of Horror collection.

After their young daughter accidentally drowned John (Donald Sutherland) and Laura (Julie Christie) move from their home in England to Venice, Italy. John has been hired to restore an old church. While there Laura meets two elderly sisters, one of whom is blind and proclaims to have “second sight”. She says that she could see the dead daughter standing by the couple while they were eating and that she was happy.

Laura, still deep in her grief, takes solace in this notion and wants to speak to the ladies some more. John, also still deep in grief but maintaining absolute rationality, thinks the sisters are up to something.

That’s the very basics of the story, but in director Nicolas Roeg, and editor Graeme Clifford’s hands the film is much more than the details of what actually happens in the plot. Most of it was shot in Venice and the city comes off as a shadowy, crumbling old town filled with strange characters, dark corners, and ghosts. The film flashes backward and forwards, often for just flickering seconds. It flashes back to the day when their daughter drowned and to moments we’ve already seen in Venice. It flashes forwards as if premonitions of a future they want to avoid.

There is a famous scene in which John and Laura make passionate love (so passionately that rumors persist to this day that the actors were fully engaged on set) and the scene flashes forward ever so slightly to the couple dressing afterward. We see them pull their clothes off to make love then immediately they are individually putting new clothes on for dinner. They kiss passionately then shirts are buttoned. Etc. Over and over throughout the film scenes do this, giving it a dream-like quality. Little moments mirror each other too. We’ll see a reflection in the Venice canals and then a flash of the pond where the girl drowned. Time loops in on itself.

The ending is one of the more startling finishes to a film I’ve ever seen. The whole thing is marvelous. I enjoyed it more this time than the time before.