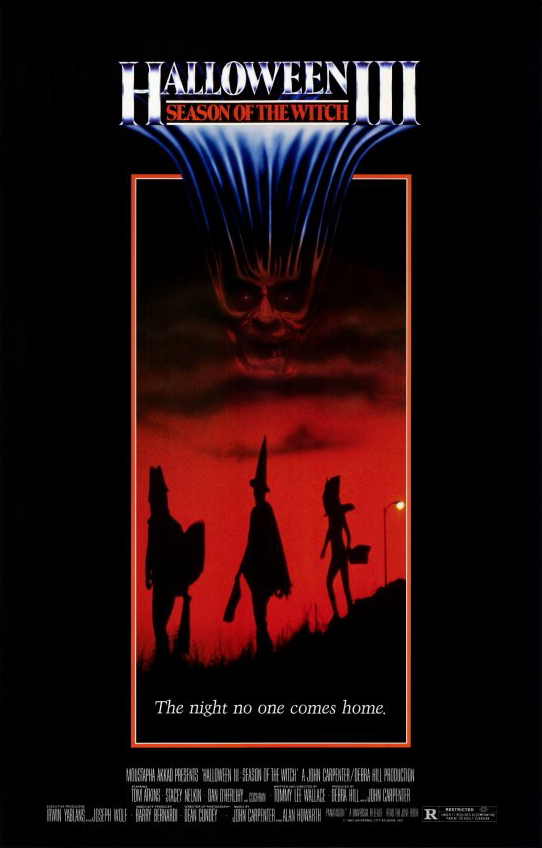 Halloween Ends, the third and final film in David Gordon Green’s Halloween trilogy came out this weekend. Since I’m not likely to see it in theaters I thought it would be fun to return to the original set of films. I’ve seen the original Halloween (1978) many times and I watched Halloween II (1981) a few weeks ago so this time I hit up Halloween III: Season of the Witch (1982). I probably would have watched that one anyway because the early chatter on Halloween Ends is that it steals a lot from this film.

For those not in the know, the Halloween franchise is a bit weird. The original was written and directed by John Carpenter (with a little help from Debra Hill). It was a huge success and essentially created the 1980s slasher craze. Carpenter had no interest in a sequel but pressures from the studio (and presumably big sacks of cash) helped persuade him to write Halloween II. Both follow a young Laurie Strode (Jamie Lee Curtis in a breakout performance) being followed by a psychopathic killer named Michael Myers.

When part II was a success more pressure and more bags of money came into play but Carpenter put his foot down this time. He didn’t want to be a part of another sequel. Eventually, he agreed that there could be a sequel but there would be no Laurie Strode or Michael Myers. They could do an anthology series with each film being based on the general concept of the Halloween holiday is scary.

From this Halloween III: Season of the Witch was born. It has nothing at all to do with the original two films. In fact, the original movie is apparently a film inside the world of Season of the Witch as we see advertisements for it and actual clips from the film on the television within this movie. Initially, audiences hated part III. So much so that the anthology idea was scrapped after its release and part IV brought back Michael Myers and prominently displayed the in the posters and even called it The Return of Michael Myers. I watched that one recently as well, so I’ll talk about it in another post. But for now, let’s actually get to Season of the Witch.

An old man collapses at a gas station and is taken to the local hospital. He mutters something sinister and passes out. Later another man dressed in a nice suit and tie crushes the old man’s skull with his bare hands. Then he walks to his car and sets himself on fire.

The old man’s daughter, Ellie (Stacey Nelkin) talks to Dan (Tom Atkins) the doctor on call, about what happened. They begin to investigate which takes them to the sleepy town of Santa Mira, CA where the Silver Shamrock headquarters is. It seems that was the last place the old went to before winding up dead. There they find a conspiracy involving killer robots and Halloween masks that turn your head into buts, snakes, and other creepy crawlers.

Neither Neklkin nor Atkins give what you’d call a great performance, but they are serviceable. The story isn’t great and it is a big pile of 1980s cheese, but I kind of love it. The concept of a novel holiday company being run by an evil genius with supernatural tendencies is kind of awesome. It shouldn’t work, but it totally does.

It is interesting that initial audiences hated this film, but in recent years it has been reconsidered and it now has a very large fan base. I can see how filmgoers coming to the theater in 1982 expecting another violent romp with Michael Myers would have seen this and come out scratching their heads. But now it seems like such a bold move by the filmmakers. In a world drenched in sequels, prequels, and reimaginings, where the MCU has created an unstoppable universe where every film and TV show plays off one another, it is almost impossible to imagine a film like this getting released today. That alone is pretty cool. I wonder what people would think of it now had it been released on its own, without any ties to the Halloween franchise. Would audiences than have been more receptive? Would it now be a forgotten classic? Who knows? But I’m glad it exists.

2 thoughts on “31 Days of Horror: Halloween III: Season of the Witch”