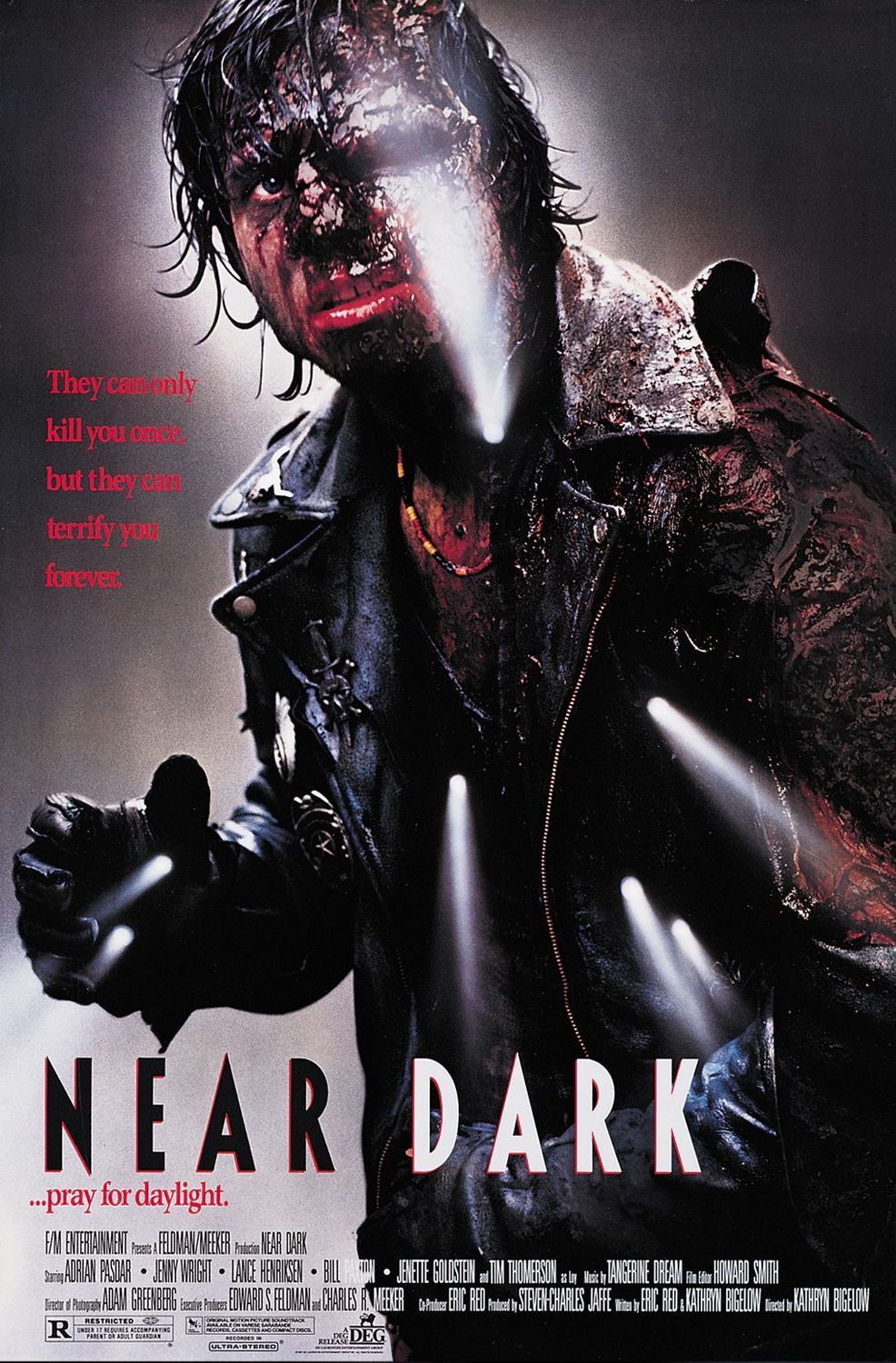 A couple of young guys are hanging out one evening on a sidewalk. They spy a pretty woman standing alone. One of the guys, Caleb (Adrian Pasdar) walks over to her. Or rather he struts. He’s full of confidence. He asks the girl her name – it’s Mae (Jenny Wright). He asks if she’s got a boyfriend. She says she needs a ride home.

In his truck, he is full of flirt. He asks her to slide over. He puts his arm around her. She asks him to stop so they can look at the night. He tries to kiss her, but she pulls away. Later they stop again. He literally lassos her and tries to kiss her again. She sees the dawn coming and says she has to get home. Now. He says he won’t take her unless she kisses him.

The beginning of Kathryn Bigelow’s Near Dark begins with a push and pull of the most interesting power dynamics. It is a situation most women will recognize, I imagine. A man offers kindness to a woman, but the wants something in return, and he gets more and more demanding if not immediately satisfied. But we know something poor old Caleb doesn’t – Mae is a vampire and she can bite him anytime she wants. She does exactly that when he tries to stop her from returning to her home before daylight.

When he turns, she introduces him to her band of fiends which includes Lance Henriksen as the defacto leader who has been around since the Civil War, Jennette Goldstein, Joshua John Miller who plays a vampire who was turned when he was just a kid and Bill Paxton whose channeling his Aliens character’s energy, but without the fear and a whole lot of nutso bravado. If you are paying attention you’ll notice that half the cast was also in James Cameron’s Aliens. He was dating Bigelow at the time and basically told her his cast would be perfect for her film and she agreed. So do I.

It is a western take on the vampire story and it is rather glorious. Shot in parts of Texas and Oklahoma, Bigelow fills the screen with this wideshots of beautiful, desolate landscapes. There are bar brawls and shoot-outs. The violence is stylish and brutal. The story – which winds up being about Caleb’s reluctance to take human life – is a bit too familiar, but I love the way it is told. And Paxton is bloody fantastic.