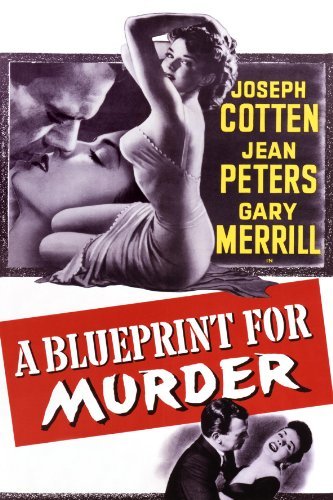 Joseph Cotten plays Whitney Cameron who is called to the hospital when his niece has taken ill. There with him is Lynne (Jean Peters) the widowed wife of his brother. When the girl dies Whitney decides to stay in town a little longer. When the doctor cannot figure out how the girl dies Whitney and his two friends suspect foul play. Lynne, it seems, stands to inherit a lot of money if her two step-children die. With one gone that only leaves the boy. With no proof that Lynne is the killer, Whitney must try to find some evidence while also keeping the child alive.

A Blueprint for Murder has many of the hallmarks of a good noir, but it never quite got there for me. It was directed by Andrew L. Stone who won an Oscar for a film called Julie (1956) but I had never heard of him prior to watching this film. It looks good, but it never quite builds up the tension it seems to be going for. Whitney Cameron has doubts as to whether or not Lynne is actually the killer but the film never gives us any reason to doubt. There are scenes in which the child’s life seems to be in danger, but what Hollywood movie from 1953 is going to kill off a child like that? And so there isn’t any real tension built up.

It is a perfectly run-of-the-mill movie. I suspect I’ll be watching quite a few of those this Noirvember, as I’m intentionally seeking out lesser-known ones. Yet I still love this sort of thing. I like Joseph Cotten quite a bit and I’m always glad to see more of his films. And, while seeking out and watching lesser-known films often brings movies that aren’t that great, you also find hidden gems, and that makes it all worth while.