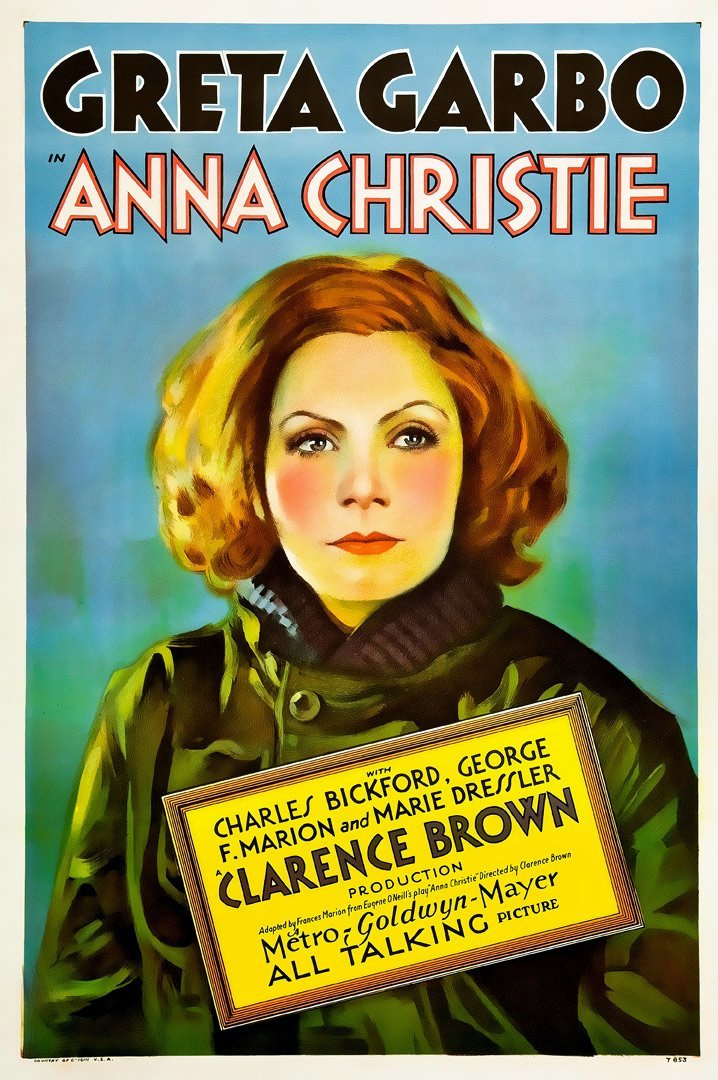 Greta Garbo was one of the biggest movie stars of the silent era. She had a mysterious, luminous on-screen persona. Despite this she, or perhaps the studios, were reluctant to bring her into the sound era. She was born and raised in Sweden and didn’t speak a word of English when she first came to the United States. By 1930 she was fluent in the language but still spoke with an accent, which no doubt created fears in everyone’s mind that audiences wouldn’t take to the actress once they could hear her talk.

If you’ve ever seen Singin’ in the Rain you’ll know what they were worried about.

The fears were unfounded for Anna Christie her first “talkie” movie was a rousing success and she remained one of the biggest box office stars for the next several years.

MGM played up Anna Christie by promoting it with the tagline “Garbo Talks” (nine years later they’d play with that tag when she made her first comedy, Ninotchka by promoting it with “Garbo Laughs”.) Her famous first line is “Gimme a whiskey, ginger ale on the side, and don’t be stingy, baby.”

For all that, the movie is actually kind of dull. Garbo plays the titular Anna who was abandoned by her father (George F. Marion) at a young age and sent to live with her cousins on their Minnesota farm. They abused her and she moved to St. Paul by herself where she became a prostitute. After a stint in a hospital, she moves back to New York in hopes her father will take her in and let her rest.

He does and they reconcile she meets a sailor and they fall in love. The big drama comes in whether or not these two men will still love her once they find out about her past. The ending is fairly typical for its time period but somewhat shocking as seen through modern eyes.

Garbo and the rest of the small cast are quite good. The story lacks any real emotional punch and the direction is mostly flat. There are a couple of interesting visuals including one scene on a roller coaster where the camera sits in the seat in front of Garbo looking back at her. The other gives us a bird’s eye view at one of those strongmen uses a hammer to ring a bell contraptions. But mostly the camera stays in fixed positions while the characters do a lot of talking. Presumably, the camera doesn’t move much because this is an early sound picture and they were afraid to much movement might hit a microphone or the characters might move to where the mic couldn’t hear them. Again if you’ve seen Singin’ in the Rain you’ll know what I’m talking about.

Actually, you’d be better off just watching Singin’ in the Rain again. Unless you are a big Garbo fan, this one is quite skippable.