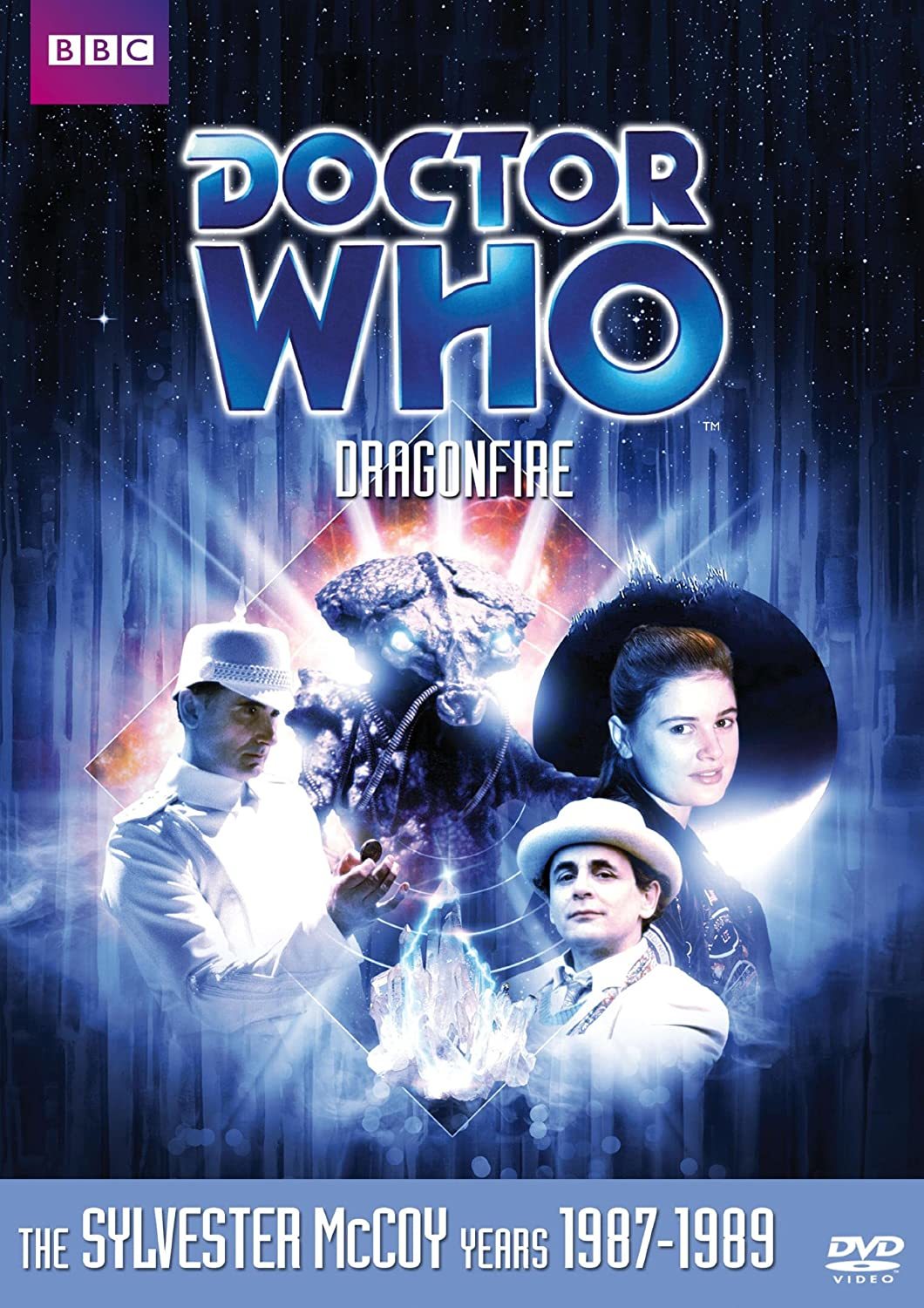 While we do watch the new Doctor Who series every Friday I periodically watch the Classic Series. I do that pretty randomly – jumping around from story to story, Doctor to Doctor, whenever the mood hits me. Since I’m planning on writing about NuWho every Friday I thought I’d write about the Classic Stories as well.

Dragonfire was the final story in the 24th season of Doctor Who. It saw the end of Mel (Bonnie Langford) as the Doctor’s companion and the beginning of Ace’s (Sophie Aldred) run. She would be the last companion of the classic series.

The Doctor (Sylvester McCoy) and Mel land the TARDIS on Iceworld, a trading colony on the dark side of the planet Svartos. At an ice cream parlor, they run into Sabalom Glitz (Tony Selby) whom The Doctor had run in a previous story (Trial of a Time Lord). Glitz has a map that purportedly leads to a treasure buried under the colony. A treasure that is protected by a dragon. As it happens Ace is working at the ice cream shop as a waitress. She was accidentally transported to Iceworld from her home on 20th-century Earth while she was toying around with some homemade explosives. She is totally keen to follow our heroes, battle a dragon and capture the treasure.

Our main villain is not the dragon, but rather Kane (Edward Peel), a great evildoer who was exiled to Svartos some 2,000 years ago. He hopes the treasure will help him return to his home planet. The trouble is his natural body temperature is super cold and any conflict with a fire-breathing dragon would kill him. He’s been waiting for someone courageous like the Doctor to get the treasure for him.

Not knowing that they are unwittingly doing Kane’s bidding The Doctor and his companions venture underneath the city in search of the dragon and the treasure. They find both, but as these things usually go Kane gets the treasure which is an energy source he can use to pilot his spaceship and return to his home. Naturally, he is thwarted and The Doctor wins.

As a story Dragonfire is pretty lacking. Kane is straight-up evil. He enslaves the people of Iceworld to do his bidding and generally doesn’t care if they live or die. The sets are actually pretty great with lots of plastic sheeting used to create the ice world. There the usual caves and what-not, but they use them to good effect. There is one giant room that must have been built on a massive sound stage that gives the place a more expansive feeling than most Doctor Who stories.

Mel has never been my favorite companion and she’s not given much more to do here but complain and scream in terror. Still, it is always a little sad to see a companion go. Strangely, throughout the story she makes no indication that she plans to leave and then in the last five minutes she’s like “well, I’m off, see you around Doctor” and leaves with Sabalom Glitz. I haven’t seen the previous story so maybe she indicated this was going to be her last adventure there, but it seems so quick here.

Ace is naturally then invited to go on more adventures and she gladly accepts. I’ve come to like her as a companion with her adventurous spirit and willingness to jump right in (and blow things up).

So not the best story, but not the worst by a long shot.