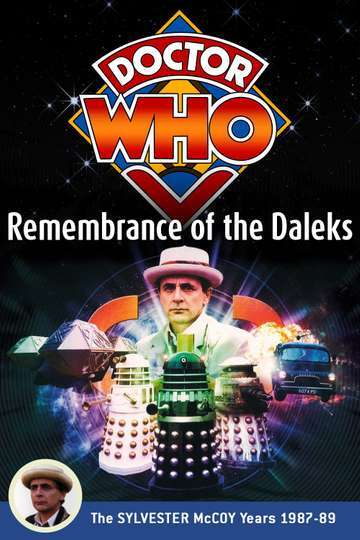 In watching Classic Doctor Who I really do have a tendency to skip around. In this, case I recently watched this story which if the first part of Season 25, then went back to watch Dragonfire which was the last story of Season 24 and after, that I watched The Happiness Patrol which is the second story of Season 25. Normally I skip around a lot more than that but I liked this story quite a lot and as it was clearly early days for Ace, I wanted to watch her intro. But whatever, here we are.

The Doctor and Ace landed on Earth in the year 1963. They are after the Hand of Omega, a Time Lord device The Doctor left at Coal Hill School during his very first visit to Earth. They find the device but also discover two warring factions of Daleks. He must enlist the help of the military to stop the Dalek’s war from destroying the world.

As this story begins the series 25th year there are lots of references to previous stories. The series began in 1963 and the very first story too place at Coal Hill school. The Daleks were some of the first villains he fought in the story (and they remain a fan favorite). They return to seveal locations The Doctor visited early in the series and there are loads of little Easter Eggs hidden throughout, like when Ace picks up the very same book that Susan had handled in the fist story.

As such this story is a delight for old fans who can delight in all of the throwbacks and references, but its also a very fun story on its own. It is packd with action and there are some good bits of humor. Sylvester McCoy, who laned the role just a few short weeks before Season 24 began shooting finally had time to actually think about what he wante to do with the character and he seems to fully inhabit it here.

All around it is a very fun story and one of my very favorite late-era Classic Who tales.