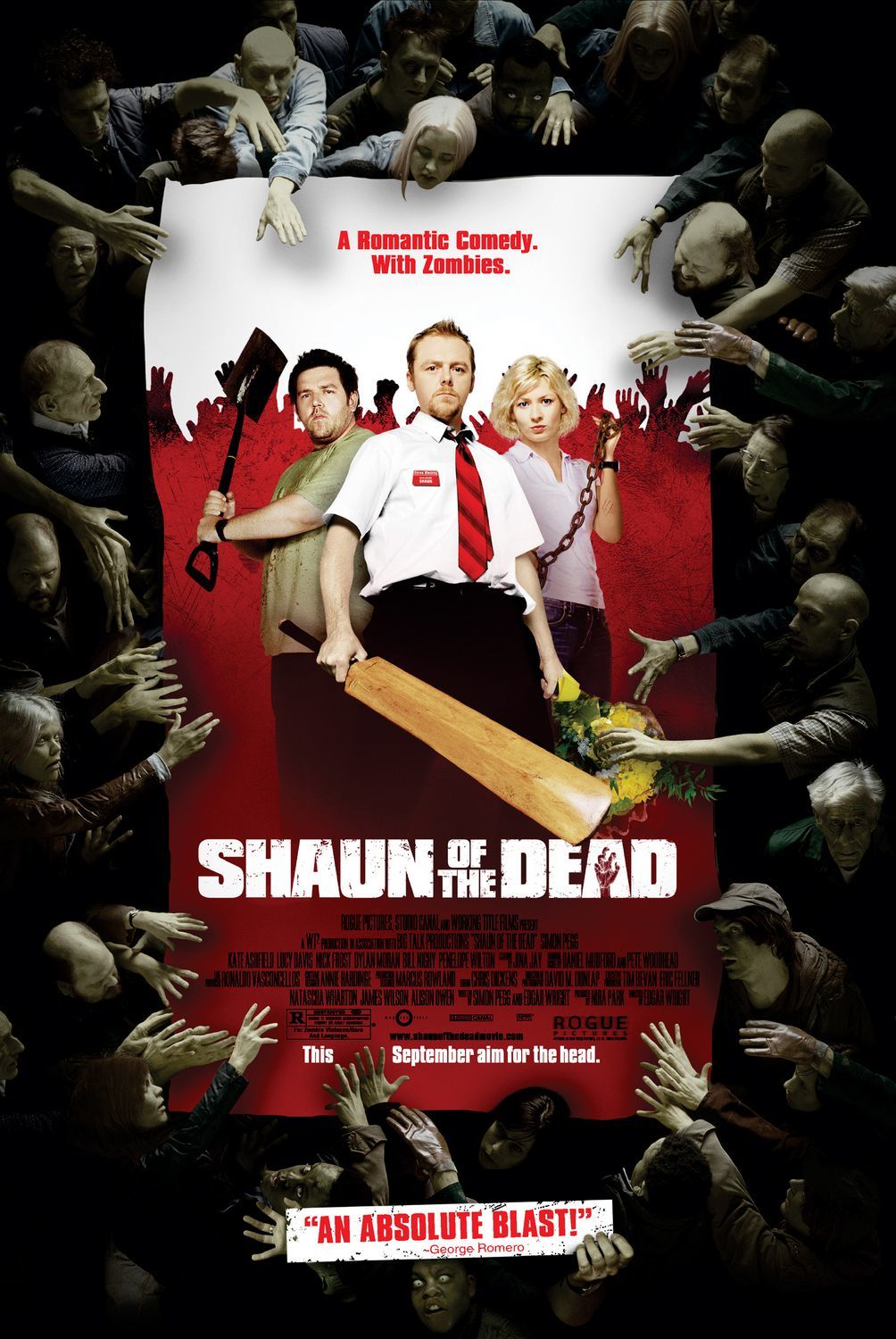 Editors Note:   I don’t know what I was thinking with this review.  I’ve since watched Shaun of the Dead many, many times and I absolutely love it.  I don’t know why I didn’t find this movie funny the first time, I now think it is hilarious.  Oh well, you live you learn.

I’m the type of person who doesn’t read movie reviews before I watch the film. I don’t seek out trailers online or read the latest dish on upcoming releases. I prefer to go into a film with a clean slate, knowing as little as possible about the film before I see it. I find the moviegoing experience more enjoyable when I have fewer preconceived conceptions about the movie I’m about to watch. That being said, I love to read reviews and seek out trivia about movies that I have already seen. I enjoy reading other people’s thoughts and ideas about a movie and comparing them to my own.

Since living in France I have completely been out of the entertainment loop. We don’t have a TV and it is rare that we go to a new movie. I do visit a few websites to keep up with the news and hear bits and pieces of the movies that are coming and out and generating some buzz. Shaun of the Dead is a film that I have been hearing buzz about for several months. I refused to read any reviews or really research any aspect of the movie, but I couldn’t help but hear bits and pieces of good things about it. Primarily that it was a funny zombie spoof. Being a fan of the zombie genre, when the chance came up to borrow the DVD, I didn’t hesitate to take it.

The plot is the pretty standard zombie plot. Some type of radiation/virus wreaks havoc on the earth re-animating the dead into brainless, homicidal maniacs. The movie does a good job of spoofing many of the conventions of the genre. The title character, Shaun, (Simon Pegg) is so stuck in his humdrum existence it takes him a couple of days to realize that his city has been attacked by zombies. He has a dead-end job, his girlfriend just broke up with him, and his flatmates are constantly fighting. Despite there being several zombies eating human flesh around him and the constant media blitz,  it literally takes a zombie in his backyard for Shaun to notice. There are a number of truly funny scenes that mimic many of the classic zombie cliches.

Here, the zombies walk in the classic, slow-motion, brain-dead way. They are mockingly slow. In one scene Sean and his friend, Ed (Nick Frost), throw a large crate full of junk at two zombies, then have time to run for a crate of records and argue which records are crappy enough to launch. The entire time the zombies are slowly walking toward them to devour Shaun and his friend. Other scenes have one zombie being beaten with pool sticks repeatedly to little or no effect. Time and time again there are little digs at the genre conventions while still lovingly following them.

A quick perusal of IMDB’s list of trivia for this film will show plenty of references to nearly every zombie film imaginable. I consider myself a fan of zombie films, but these guys must be nuts about them. They’ve set up multiple scenes that are an exact homage to older films. They’ve lifted lines right out of the classics of the genre. I must say that while reading the list I became more impressed with what the filmmakers created with this picture, but while watching it most of the references went over my head. As I said, I like zombie movies. They’re gory, violent, bloody, and often hilarious (intentional or otherwise). I have seen more than my fair share of good and awful zombie flicks. Yet here, most of the references were naught caught by me. I can’t exactly fault a film for referencing so many other films, yet I have to wonder who but the diehard zombie fanatic caught them.

My biggest complaint about the film is that it is too comedic, without being funny enough. What I mean by that is that the production is made like a comedy. The actors play their parts as if they are in a comedy and not the horrible zombie-addled situation that is scripted. Sure, there are a few moments of anguished screaming and fear, but those are over acted and far between. The story is truly frightening, the dead came to life and are devouring the city. This is not a light-hearted romp. Though often quite funny, zombie films play the situation straight. I felt let down that everyone was playing the situation for gags and not allowing the comedy to be more organic, or to flow out of the conventions of the genre itself. In the end, I didn’t find the movie funny enough for all that.

It was played for humor all the way through, yet I wasn’t laughing nearly enough. Some of this comes from not getting all the “in” jokes. Some of this is also, likely enough, because it is a British comedy at heart. There are a number of bits that seem to play better for the British sensibilities than my American in France’s heart. There were several moments that I could see the joke play out and “get” it, but it wasn’t enough to really make me laugh. This is not to say the movie isn’t funny. Because it is, often hilarious even. It’s just that the tone of the film was of great comedy, and the buzz I had heard matched this. Yet while watching it, I didn’t find it as funny as expected.

While thinking about this review I began to wonder how I would make a zombie spoof better. It wouldn’t be right to go the Zucker brother’s way. I got over that type of comedy in junior high, and the genre (well the horror genre which zombie movies are a sub-genre of) has been spoofed in this way enough (see Scary Movie). Slap stick spoofs were perfected by Sam Raimi in the Evil Dead series. In the end I decided that what the filmmakers were trying to do with this film is exactly the way to do it. I just think they missed the mark a little. I think I was partially disappointed because the genre itself has produced enough unintentional humor. Zombie movies are so often insanely bad, they are great fun. It is difficult to spoof a convention when the convention itself is so awful it seems a spoof unto itself. Likewise, some of the conventions such as the ineptness and slow walk of the zombies have been revamped by the likes of Danny Boyle. Instead, here, I would have preferred a darker, bloodier movie. I don’t believe this would have hurt the comedy. The references and homages could have stayed in tact and comedy could come out of horrific situations.

Shaun of the Dead is a fine movie. It spoofs a genre of film that is dear to my heart, yet remains firmly a fan of the genre. It references so many of the classics and non-classics of the genre that you’ll need an encyclopedic knowledge of zombies to catch them all. It is truly funny and makes a great party movie. Where it fails, it fails as a zombie movie. It is made for jokes and not scares, and there it falls a little flat for a good spoof. But certainly worth the price of the rental.