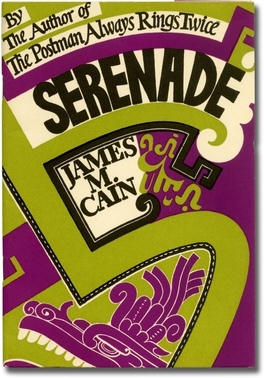 James M. Cain wrote in the first person, from the criminal’s perspective. His storytellers are not usually hardened criminals, yet through circumstances commit the most atrocious of crimes. He writes about downtrodden, out-of-luck schmucks, who fall for the wrong kind of girl. Interestingly, it is usually his women who are tough, manipulative, and full of lust for the crime. The men tend to be suckered in by their seductive charms.

Serenade centers around a down-and-out opera singer, John Howard Sharp. He is so down on his luck that he’s been singing in a small club in Mexico, before, even they, kick him out. His luck seems to change when he meets a cheap whore, whom he falls with. His love for her causes his once faltering voice, to come back. What follows is a transcontinental series of adventures cataloging John’s skyrocketing rise in both movies and the New York opera, and his subsequent fall.

There is plenty to like about Serenade. Cain’s terse, cynical prose moves across the page like a song. He accurately portrays John’s love and hatred for his lover. There are plenty of nice character moments. Moments that give just the right details that give meaning to ordinary events. Much of the “action” of the story revolves around the little moments of life: sitting in a room talking to friends, stroking the hair of a girl, and listening to music. Cain understands that much of life is filled with these types of moments and that great changes and meaning can be found in them.

Before Cain became a writer, he was trained as a singer. In part, this novel seems to be an attempt for him to allow his musical knowledge and training to come to some use. Throughout the book, John converses about or describes internally the music he likes and hates, musicians, and his own singing. Some of this is vitally important to the story, for he is a professional singer, and the plot concerns his successes as such. Yet it is so infused with information that it, at times, feels more like a trade magazine than a proper story. At only 136 pages, it is superfluous to fill so many with discussions on Puccini and Mozart.

There is a revealing moment about John’s character in the last third of the book. Even while reading this in 2005 it seemed shocking. Yet it is treated with aplomb, handled with an expert hand. The feelings that arise out of the character seem true if not entirely kind. It is also interesting to see how that particular issue was handled at that time.

Overall, Serenade is an interesting read. It is well written and the characters are well drawn. However, if you have never read anything by James M. Cain, I would recommend picking up The Postman Always Rings Twice and then Double Indemnity before I began reading this.