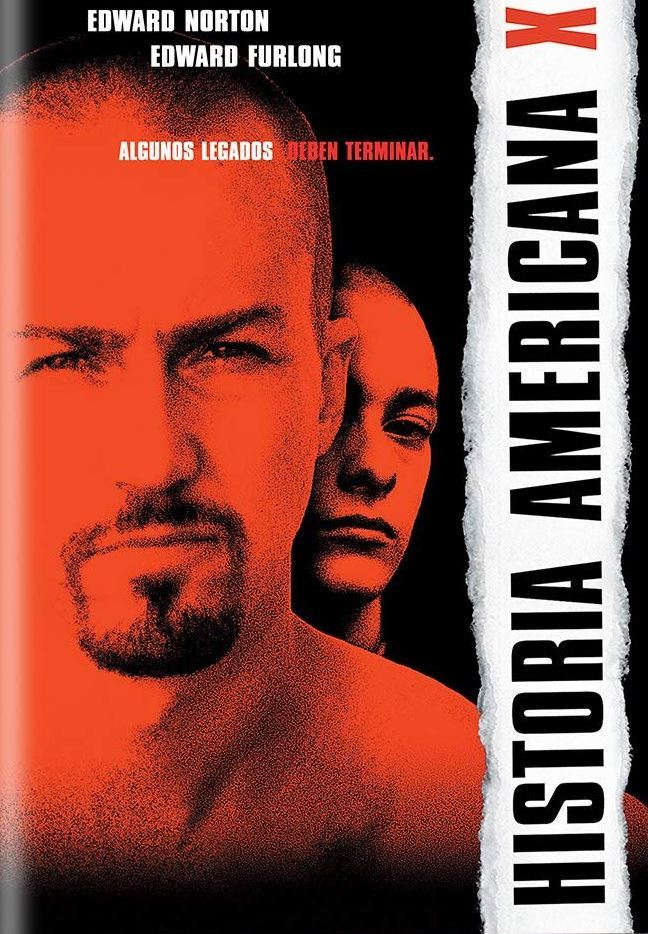 There are spoilers. Read at your own risk.

It has been many years since I have seen this film. My memory attested it to be an excellent picture that meaningfully discussed issues as heavy as race relations, prejudice, and hatred. Unfortunately, my memory is a little at fault, and upon viewing it this time I found it a bit disappointing. The film sets its sights on the heavens, and while succeeding in many ways, it could not attain such a lofty height. In trying to cover all the basis in such a thorny issue as race relations it cheats a bit in its storytelling. But we’ll cover more of that in a bit.

The plot involves a young, white man named Derek Vinyard (Edward Norton) and the tumultuous 24 hours after his release from prison for killing two black men, while they were trying to steal his car. Much of the story is told in a flashbacked black and white. Here we learn that Derek was a Neo-Nazi skinhead leader who had a change of heart after his stint in prison. Post-prison time is being spent trying to keep his brother, Danny (Edward Furlong) from following in his footsteps. A path he is already walking down.

This is a powerful, moving film. Reading the boards on IMDB will attest to lives being changed through watching it. It works best when it shoots for an emotional response, rather than an intellectual one. Scenes such as when Edward Nortan’s skinhead leader rallies the troops to loot a local grocer, the opening scene where we see Norton kill the two aforementioned black men, or a traumatic rape scene in prison, emit a guttural response from its viewers. It is in such scenes that we are rallied into a discourse on the issues presented. Yet when the film gets talky it falls short of its ideals. It presents nothing beyond the general rhetoric you can find just about anywhere. In fact, most of the rhetoric is spewed from the Neo-Nazi skinheads, and this type of discussion can be found every other day on daytime talk shows. There is little in way of discussion from the rational, unprejudiced mind.

There are two powerful performances from Edward Norton and Edward Furlong. At this point Norton was already beginning to take his role as the new Robert DeNiro, who had previously taken his turn as the new Marlon Brando. Let’s hope he escapes the fate of mediocrity that they fell into. Furlong who once made Arnold Schwarzenegger look like Laurence Olivier with such a wooden performance, here has finally made himself worthy of attention. He gives a fine performance here, as a young man struggling with the passionate feelings of youth.

Tackling an issue as heady as racism in America is a worthy, yet difficult cause. It proves to be too much for first-time screenwriter David McKenna and director Tony Kaye. Trying to condense their story into regulation movie time they either skipped over completely or barely touched on some important issues. To give reasons for Derek’s turn as a skinhead we are only allowed one small dinner table conversation with his father who spews some hateful race sentiments. This and his father’s murder at the hands of black addicts in a crackhouse, whom he was trying to save from fire must suffice for an intelligent, middle-class youth to turn into a Nazi. Likewise, his subsequent salvation in prison does give us sufficient reasons for this turn of heart. Yes, the skinheads in prison are hypocrites, and yes the rape scene is brutal enough to turn away from their midst. But, his relationship with his black coworker, Lamont (Guy Torry) is not enough to change the heart of such hatred. Torry gives a fine performance, and does enough to show Derek that all blacks aren’t as vile as the rhetoric made him believe, but are jokes about sex really going to make a skinhead believe in the goodness of the black race?

In searching for a cause behind the Neo-Nazi scene in America the filmmakers seem to point directly towards the intense feelings of anger found in adolescence and the need to fit in with some social group. And rightly, these two issues play powerfully on the minds of many in the skinhead culture. But the issue goes deeper than this, and it is here, again, that this film misses the mark. Just as Derek dismisses issues of poverty, and social position in the plight of the black man this film seems to skim over some of the deeper motivations behind racism.

Don’t get me wrong. This is a powerful, well-made film. There is plenty to chew upon and discuss. It is, in fact, a good film to watch with others and bring to light an important debate. Yet when I watch it I can’t help but think of how it could have been better, how it could have reached the heights it was reaching for.