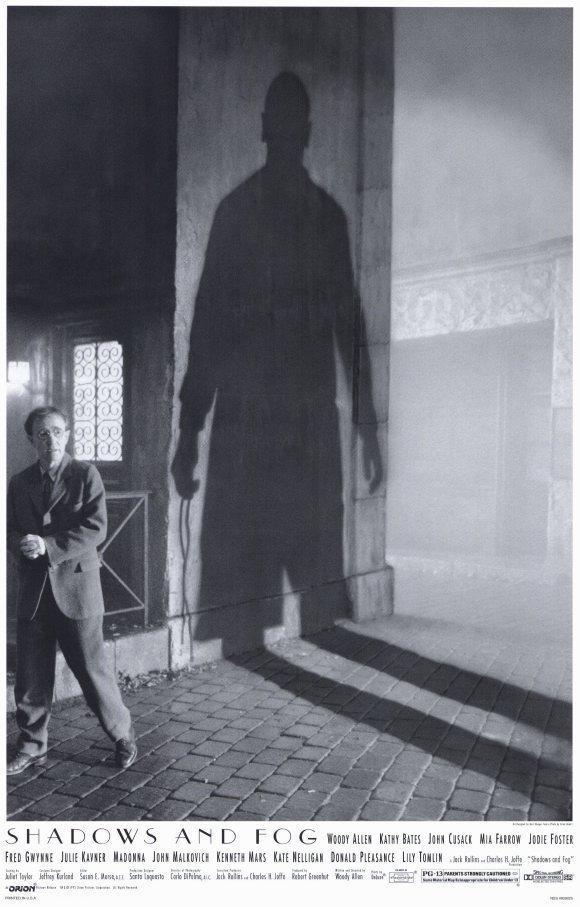 Editors Note: I wrote this long before I knew of the various accusations against Woody Allen. I have no comment to make about those allegations, but as I am reposting this review in 2022 I wanted to note that this is not any sort of endorsement of Allen as a human being, but simply a review of his film.

Woody Allen’s tribute to German Expressionism is better than most critics would have you believe. Sure there is very little plot to speak of, it’s more a series of vignettes and gags than a cohesive narrative. Sure, it ends rather abruptly, never solving the mystery, but none of this stopped my thorough enjoyment of this film.

As the title suggests the entire movie is designed in shadows and fog. Shot with beautiful black and white photography, Allen and cinematographer Carlo Di Palma create the look and feel of an unnamed East European city as seen in such films as M and Nosferatu. The lighting is set up so that in nearly every shot underlying shadows engulf the scene. In the exteriors, a vicious fog rolls across the night sky obscuring most details. Through the fog bumbles Kleinman (Allen is his typical neurotic schmuck role) trying to find his role in a vigilante mob’s plan to stop a serial killer roaming the streets. From dark night until dawn, Kleinman wanders from place to place meeting a wide variety of curious characters (played by an even more curious group of celebrities), the most endearing of which is a desperate sword swallower (Mia Farrow)who has wandered into a brothel after fleeing her cheating boyfriend/clown (John Malkovich).

It is a little unsettling to watch Allen do his normal schtick while the characters around him are murdered, subjected to racial prejudice, and beaten by the police while discussing such subjects as love, sex, and meaning. There is a subtext involving the plight of the Jews between the World Wars, foreshadowing the Nazis. Yet the gags remain as solid as any Woody Allen film. Amongst the seriousness of his subtext and the films he is paying homage to, Allen finds a way to bring full-bellied laughter. Though his quirky neurosis isn’t as resolutely hilarious as it is in such films as Annie Hall, it is still enough to fill the film with mirth.

The film ends rather abruptly with Kleinman having never learned his role in the plan, nor the killer having been caught. Yet as the credits role we realize the mystery was not so much the reason behind the story as a method of creating it.