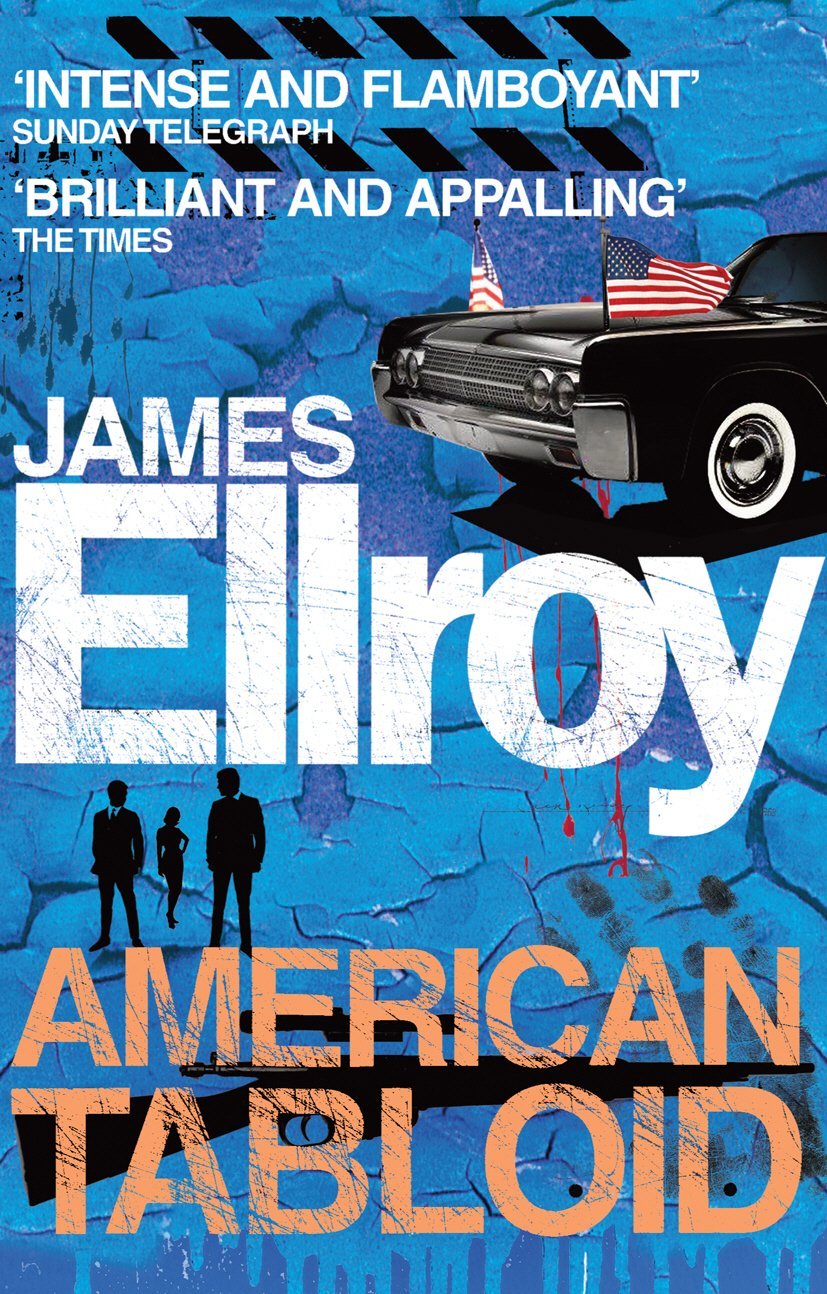 Like the supermarket rags in the title, this James Elroy novel is loaded with grandiose stories, half-truths, and more conspiracy theories than an Oliver Stone wet dream. It rewrites history in a manner akin to the Lone Gunmen in the X-Files and is a thoroughly enjoyable experience.

It is filled with wall-to-wall celebrities. There are politicians (John F.and Robert Kenney, J Edgar Hoover), flashy millionaires (Howard Hughes), and mobsters galore (Santo Traficante, Jack Ruby, etc). It retells the rise to power of JFK through a myriad of conspiracies, ending with the ultimate conspiracy, the assassination of JFK.

It is filled with bits of history and fact, but also unproven conspiracies and outright fabrications. I am not a historian, so my knowledge of the time period, while pretty good, is by no means complete. I suspect this is true for the majority of Americans. None of us know exactly what happened the day JFK was assassinated. There are a lot of theories floating around, and they all sort of blend together after a while. Elroy uses this to his advantage.

For example, it is generally accepted that John F Kennedy had affairs. During the Clinton scandals, numerous journalists touted this as absolute truth, though I’ve never once seen any hard data confirming the information. Before anyone sends in the hard data, understand that whether or not JFK did have affairs is beyond the point. As a culture we believe it, it is accepted as fact. There are many more rumors and flat-out lies, that as a culture we know, that we have heard for the umpteenth time, that it feels like the truth. Elroy writes all of these things as hard truths and then kicks them up several notches. Here, JFK not only has a few casual affairs but is an oversexed hound dog. He employs multiple persons to set him up with one-night stands at every campaign stop, for every night of the week.

Likewise, such fascinating conspiracies of the American group mind such as the CIA/Mob collaboration to assassinate Fidel Castro, and the CIA sanctioning of heroin sales to support this collaboration,. Or Joe Kennedy’s mob ties, and Jack Ruby’s collaboration with the JFK conspiracy, are all made concrete facts and punctuated with exclamation marks, ad infinitum.

There aren’t any good guys in this novel. Anybody who starts out with anything close to a normal set of morals has completely lost them by the story’s end. Though filled with real people, it centers around three completely fictional characters. Kemper Boyd carries out a tangled web of undercover work for the FBI, CIA, the Kennedy clan, and the mob. Pete Bondurant is an ex-cop who plays bodyguard for Howard Hughes and then Jimmy Hoffa and has a penchant for bloody violence. Ward Little is an FBI agent hungry for anti-mob activity, who through a series of mistakes eventually begins working directly for them.

Each character is destroyed, destroyed again, and sometimes built up a little before they are yet again destroyed. Nobody walks away clean, or undamaged. The plot gets a little thick and there were moments where I wish it had been supplied with a map and a compass. The subplots are so plentiful and intertwined it’s sometimes difficult to tell where you are at within the myriad of webs. Elroy’s style doesn’t help in this matter, for it is about as hard-boiled as a writer can be. I don’t think there is a paragraph longer than five sentences, and there are a great many consisting of only one line. Many critics have found this immensely annoying and find the novel difficult to read because of it. I had no problem with it. It made the novel faster to read, and made it seem much lighter than it actually is. Although I must say that at the halfway point through the sequel, it has grown quite tiresome.

To supply some of the details left out in the brevity of his prose, Elroy supplies any number of fake documents including tabloid cutouts, top secret documents, and verbatim transcripts of phone conversations.

It is a fast-paced, exciting, often violent book. It is pulp fiction with literary sensibilities. It doesn’t work particularly well as revisionist history, but for fans of hard-boiled crime stories, or those who can’t get enough conspiracy it is a thoroughly enjoyable read.