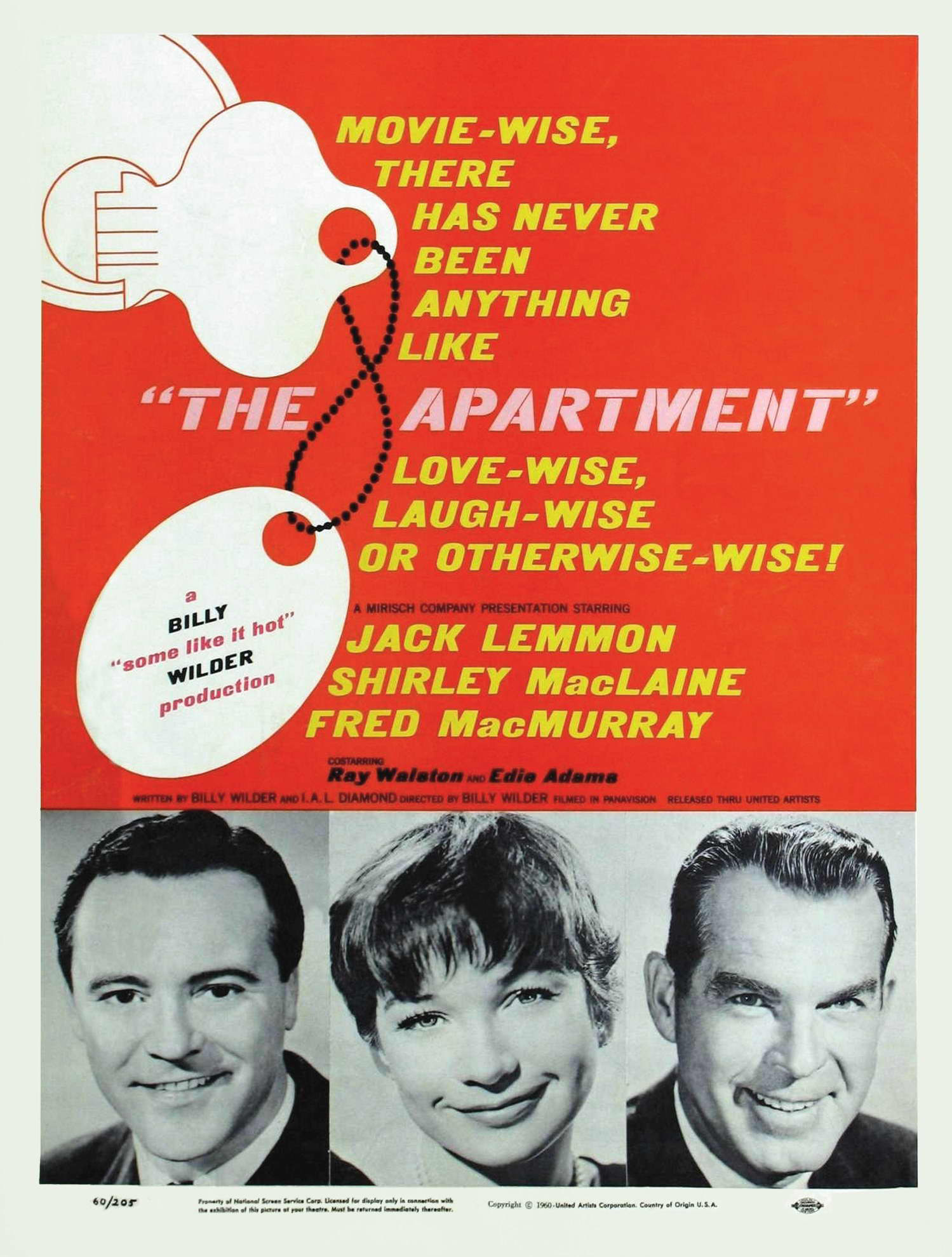 I came to this film expecting a light-hearted romantic comedy. Watching the trailer did nothing to eliminate this idea. The actual film is hardly light-hearted and is really rather sad, and dramatic.

The setup is fairly antiquated and somewhat sexist. Jack Lemmon plays CC Baxter, a quiet gentleman working as a small cog in a very big insurance company. He also happens to have a very spacious apartment to himself. Word gets around the office about the apartment and Baxter’s agreement to not be home on certain nights. Soon enough every male executive in the office is hitting him for use of the apartment for evening trysts.

Though modern audiences probably grimace at such a concept, it is pulled off quite well. For the most part, the comedy remains intact. When I said that it isn’t a comedy, I don’t mean that there isn’t lots of humor to be found. It’s just that the drama is more involved than what we typically consider to be a comedy. There are some truly funny scenes one of which has Baxter getting out his apartment planner, and rescheduling several visits from the office men. In my favorite scene, he cooks pasta with a tennis racket.

The conflict of the film involves one of the top executives of the office, Mr. Sheldrake (Fred MacMurray), and a fun-loving elevator operator Fran Kubelik (Shirley MacLain). When Sheldrake begins using the apartment to rekindle his affair with Kubelik, he promotes Baxter at the office. Not knowing that Kubelik is Sheldrake’s love interest, Baxter begins courting her himself.

Tension builds up within the love triangle. Kubelik is not the fun-loving gal she at first seemed. As Baxter gets to know her better we find that she harbors some deep secrets and her actions take a downward spiral. The film becomes rather dark, rather grim. It turns even bleaker when the principal joke wears thin. It seems the only thing holding back every married man from having an extra-marital affair is a nice place in which to have it. There isn’t a man in the cast, except Baxter, who has the slightest moral aptitude.

Billy Wilder is one of the great directors of American cinema, and it certainly shows here. Instead of going for a more slapstick approach, and the material certainly could have been handled that way, he turns it into a more touching drama.

The three characters involved in the love triangle are all superbly acted. Lemmon and MacMurray are both at the top of their game. And MacLain reminds us that she was not always the kooky old lady waxing nutty about past lives. Here she is a beautiful screen presence and holds her own against the two male leads.

What I thought was going to be a light-hearted, fast-paced romp in the vein of Some Like It Hot, turned out to be a rather poignant, sad tale of the complexities of life. This was a little disappointing while watching the film, but after letting it sit inside the recesses of my mind, it has become one of the great films I have seen. This is not to say there isn’t a comedy, but instead of jokes, the comedy comes from within the characters themselves. As in life.