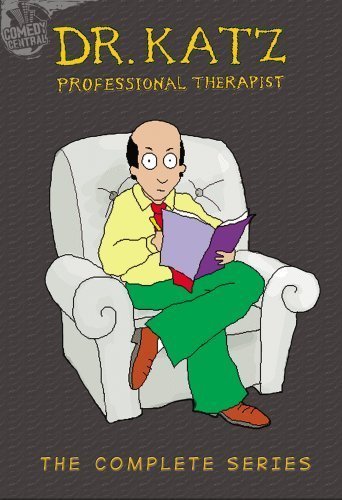 Editors Note: Dr. Katz is now available on DVD (But sadly not Blu-ray) so you may purchase your copy at the movie seller of your choice.  The Midnight Cafe does not condone piracy.

My good friend Jamison recently sent me the entire series of Dr. Katz: Professional Therapist on DVD. This has brought much joy to my heart because none of the episodes from this series are yet available on DVD. My friend bought it off of Ebay from someone who essentially put his dubbed off the TV VHS tapes into the DVD format. The quality ranges from really quite excellent to something more akin to rather unwatchable garbage. Most of the episodes have that old VHS tape that’s been sitting in the attic for a bit too long look. But it’s Dr. Katz on DVD and I’ll take what I can get.

The commercials themselves are also quite interesting. Craig Killborn is still hosting the Daily Show, Comedy Central is overhyping their sure-to-be hit show “Bob and Margaret” and Dell computers with 8 megs of RAM and 10 gig hard drives sell for only $2600!

The show itself is classic. It’s one of my all-time favorite television comedies. The set-up for the show has Jonathan Katz playing Dr. Jonathan Katz, a professional therapist (high concept, I know). His patients consist of guest stars who are generally professional comics, whose “problems” are generally bits from their acts. Other characters are Dr. Katz’s perpetually lazy son, Ben (H Jon Benjamin), and his sarcastic secretary Laura (Laura Silverman – how did they come up with these character names?). There is also the bartender and regular customer at a local pub Dr. Katz frequents (Julianne Shapiro and Will LeBow respectively).

The best part of the show is the interaction between Katz, Ben, and Laura. The three have great chemistry and often feel more like three hilarious friends sitting around trying to one-up each other. I doubt the show ever had much of a script, for it all seems rather improvised on the spot.

Ben: “I bought a, uh, one of those fake fountains. You plug it in, and the water runs constantly.”
Dr. Katz: “A urinal.”

The only problem with the show is when the guests aren’t all that funny. In the early days, the guests consisted solely of stand-up comics. Generally, these guys are spot-on hilarious, doing their best bits. But, sometimes the guest is more annoying than funny (Judy Tenuta anyone?) Since an individual guest’s bits can make up 1/4th of the show, a bad guest could really drag the show down. This is especially true when as the show got a popular, non-comedian to appear. I loved Julia Louis-Dreyfus on Seinfeld, but here she says nothing funny, and her only gag seems to be that she goes to the toilet a lot while she’s pregnant. Katz makes the most of poor guests, though, and milks the material for all its comedy potential.

In the last season, the show did what too many television shows do when running out of steam: it tinkered with its own premise and added characters. While in the previous five seasons, the only people with speaking parts were the main characters and the guest patients. In season 6 suddenly there are miscellaneous extras popping up. Why suddenly is there an exchange between Ben and his dentist? Todd, the video store clerk has become running regularly into this season as well. The actor portraying Todd (Todd Barry) had previously been a patient on the show. While the bits between Todd, the clerk, and Ben are usually funny, it is an additional character to a show flooded already with too many characters, and not enough time.

These are minor complaints in what is one of the funniest series to have ever hit the airwaves.