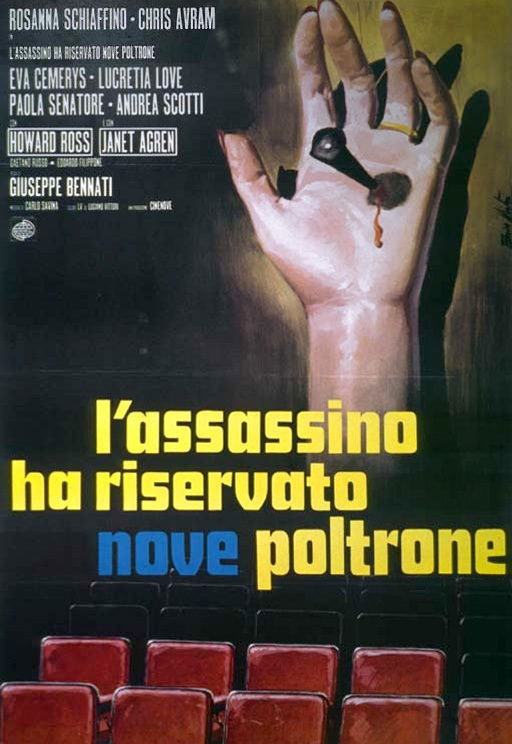 A rich man, Patrick Davenant (Chris Avram) invites a group of friends to an old abandoned theater that he owns. Once there they get locked inside and someone starts killing them one by one. Who is the killer? Why is he or she killing these nine people?

The Killer Reserved Nine Seats is an Italian Giallo by way of Agatha Christie.

All of the guests are financially connected to Davenant, in that he mostly supports them through various means. His death will benefit them all in various ways. It is his life that is almost taken first. I say almost because he is saved at the last minute. A large beam is cut free from its holding rope and it drops down on top of him, but just seconds before someone calls the man’s name, he moves and is saved.

Others are not so lucky. As the bodies pile up so do the accusations as to who could be the killer.

There is one scene in which one of the women is attacked by the killer (he’s in a mask so she can’t tell who it is). She screams and shouts for help. A man comes in and fights off the killer. The woman escapes and runs to the others. None of them believe her. They say she is hysterical and hallucinating. When they return to the room where she was attacked and find the man who helped her dead by hanging. They decide he was the real killer and guilt drove him to suicide.

I couldn’t help but watch this scene and think of the #metoo movement. About all the statistics showing that when women cry for help, when they report harassment and sexual assault they all so often aren’t believed. I have no idea if the filmmakers were thinking about such things when they created this scene, but it feels very modern.

The script is mostly nonsense. At least the parts I could understand. There were several moments in which the characters inexplicably started speaking Italian and there were no subtitles. Italian films from this era often had the actors speak in whatever language was native to them, and then they would dub in the proper languages in post-production. Presumably, these sections were moments when the English dub has been lost.

What works in the film is its vibe. The theater setting gives us several different locations with different feels. The stage has working sets for the characters to play with. Curtains rise and fall. The auditorium and lobby are beautiful and ornate. The backstage area is filled with props and costumes. Upstairs the attic is dusty and filled with cobwebs. There is even an old crypt filled with candles downstairs. All of this gives the film atmosphere. The women are dressed in fabulous gowns, and the men are in nice suits. The camera moves about, and the lighting is filled with shadows.

I love that stuff. I can put up with all sorts of bewildering things in a script if the filmmaking is interesting.