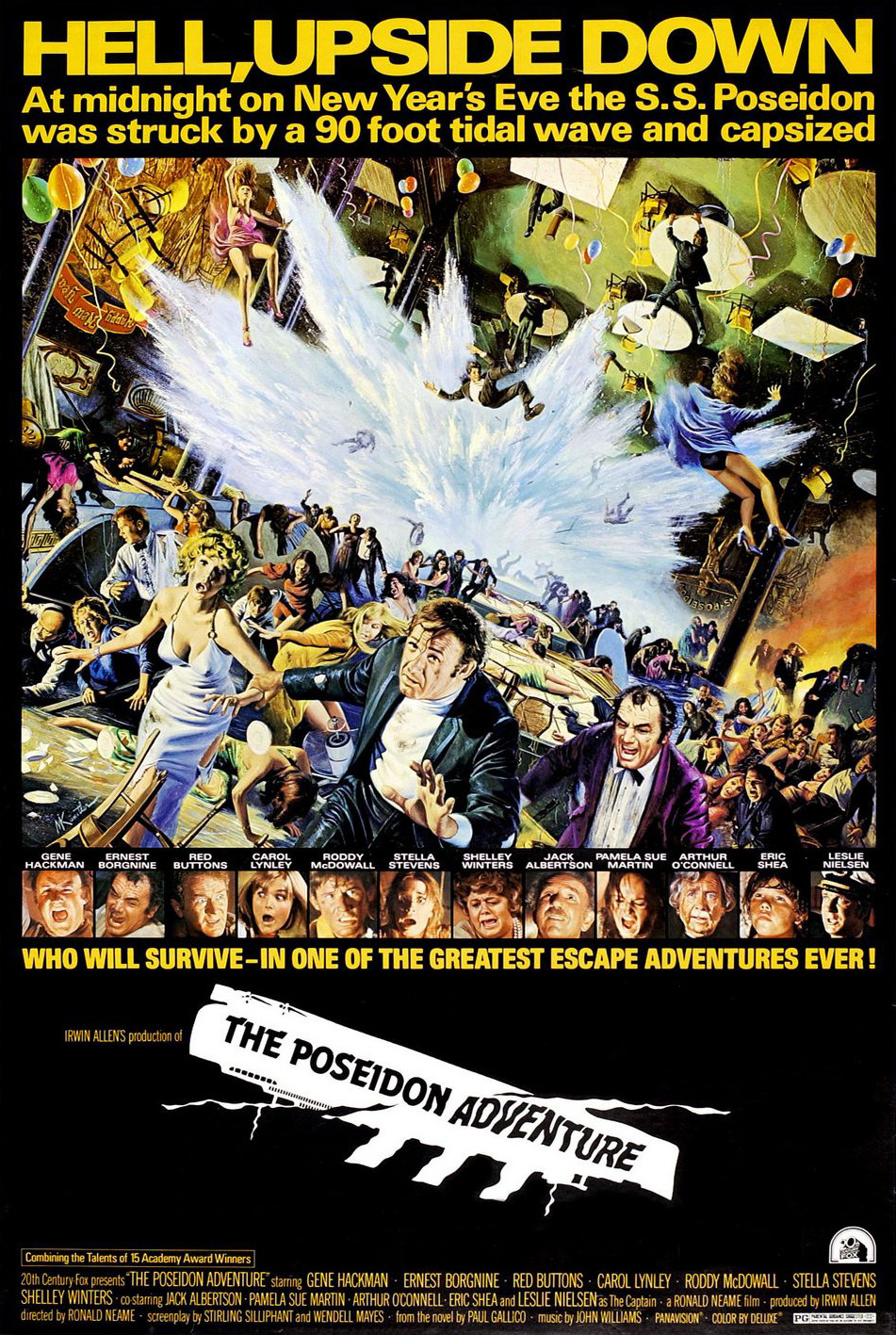 After writing all of the following out, I realized I had previously written a review of this film. I even edited it and made it public rather recently, and then promptly forgot I had done so. Rather than deleting what I’ve written here, I’ve decided to go ahead and post it. If you read the original review (which you can do here) you’ll notice my thoughts haven’t changed all that much.

I have a very distinct memory of watching this movie for the first time. My mother must have had some errands to run so she dropped me off at Grandma and Papa’s house. Flipping through the channels I landed on The Poseidon Adventure and was immediately entranced. I don’t remember how old I was, I must have been a young teen for I was old enough to appreciate the pretty actresses in their short shorts. But mostly I was there for the exciting adventure of it all.

I remember my mother returning to pick me up before the movie was over. She was a good mother, so instead of making me leave, she either stayed to finish it with me or returned later and took me home.

I’ve seen it a few times since that initial viewing and it never lives up to that original memory. I must have come to it part way through, on that first time watch because I’m always surprised at how long it takes to get to the crash. I’m also always surprised to see Leslie Nielson as the ship’s captain in a completely humorless role.

The basic plot involves an old cruise ship is completely overturned during a massive tsunami. A band of survivors must make their way up to the bottom of the ship where they hope to escape through the ship’s hull.

They are led by Reverand Scott (Gene Hackman) who has some radical ideas about God. He’s of the libertarian school of theology where you don’t pray to God for help, but rather He helps those who help themselves. There’s Ernest Borgnine as a hard-nosed New York City cop and his former prostitute wife (Stella Stevens), and Red Buttons as a love-lorn bachelor. Jack Albertson and Shelley Winters play an old married couple on their way to Jerusalem to see their new grandbaby, and Roddy McDowall is a waiter on board the ship. Two youngsters (Pamela Sue Martin and Robin Shelby) and the ship’s singer (Carol Lynley) round out our group of heroes.

Everyone is given very brief introductions with basic characterizations at the beginning of the film and they stick pretty closely to those types throughout the film but never really become fully fleshed-out people. Hackman’s preacher takes immediate charge demanding that everyone follow his lead to safety even though he really has no idea what he’s doing. Most of the named characters fall in line immediately, except for Borgnine’s cop, who constantly bickers and argues with him.

There are a lot of other characters, mostly extras, that don’t follow the preacher’s commands and naturally they all die horrible deaths. Most of the film has our heroes trying to escape from various perils – explosions, water sloshing in from the sea, fires, etc, etc, etc,. The big gag is that everything is upside down. Strangely the film doesn’t actually use this all that often. There is a funny scene in a bathroom with all the toilets in the ceiling and when the boat first overturns everyone is in a big ballroom and many people have to hold onto tables to keep from tumbling down to the ceiling. Red Buttons gets a kick out of the barbershop with its seat upside down, etc. But a big ship doesn’t lend itself to a lot of furniture or light fixtures that would make the gag even sillier. Mostly it is bit metal corridors and rooms full of pipes.

It does feel very much of its time now and again. The gang has to climb a giant Christmas tree in order to escape the ballroom and Hackman’s character tells the teenager and the former prostitute that they have to take off their gowns because they are too tight fitting to be able to climb easily in them. That might be true, but it is very cringe to hear a preacher telling these ladies to disrobe. Luckily the teenager has shorts on underneath, but the other lady has to put on her husband’s button-up shirt leaving her quite exposed. And the camera does seem to enjoy shooting them at low angles from behind. Interestingly the preacher doesn’t tell Shelley Winters (who was pretty heavyset at the time) to remove her gown. Everybody does get some big laughs in making fun of her size which seems particularly mean from this viewing.

It is still a fun film. The adventure is exciting and while the characters are played broadly you still feel for their predicament. The actors are mostly really good which allows them to feel more fleshed out than the script really allows for. It never quite lives up to my memory of watching it for the first time all those years ago, but then again, what does?