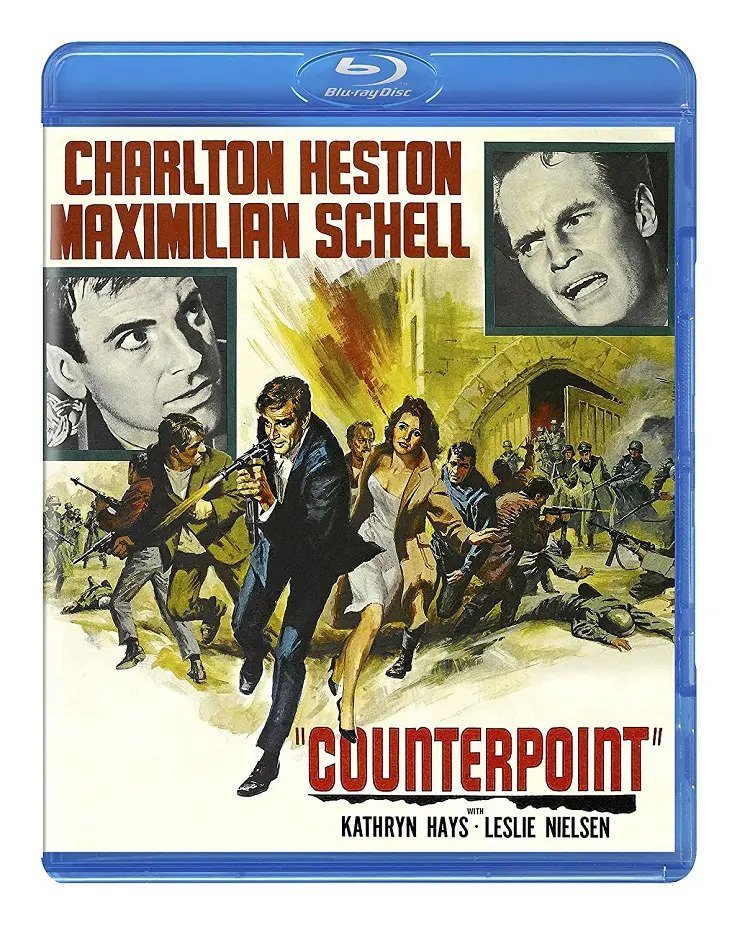 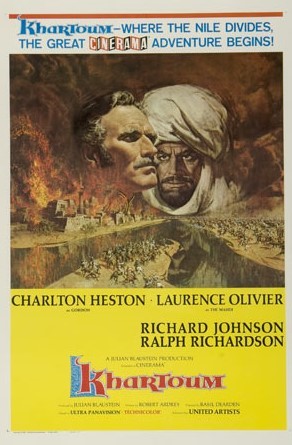 One of the fun things about going to the library is that you never know what you are going to get. They have a wide selection of DVDs, but very few are available at any given time. I was surprised this last time when I actually had a choice to pick from. Albeit it was a choice between 2 films (the few others available were either foreign films translated into French or straight French films). The choice was between the Gary Cooper version of A Farewell to Arms and an unheard-of by me Charlton Heston/Laurence Olivier adventure called Khartoum. Not in the mood for Hemingway, I decided a Heston/Olivier picture might be a treat.

To say this is a Laurence Olivier picture is to say too much. Though he gets top billing, and his character plays an important part in the picture, his actual screen time is minimal. He plays a part known only as The Mahdi, who is a Muslim that rose out of the desert to claim his place as the chosen one. I believe Olivier is an African Muslim like I believe Heston is a Mexican cop. But we suspend our disbelief and all that for the sake of the story.

As it is the story is a grand one. Based on historical events, of which, sadly, I’ve never heard a lick of until this film, where the Mahdi attempts to take control of British ran Sudan. The mysterious General Gordan (Charlton Heston) is sent down to help things along. A standoff evolves and it is wit against wit.

It is not a bad film, but neither is it a great one. There are some truly beautiful shots of the scenery. Heston plays Gordan without as much conflict as the character requires, but with enough gusto to make it believable. Olivier is, as always, near perfect. With simple facial expressions, he carries the convictions of a man who believes himself a prophet. The scenes between Olivier and Heston, though historically inaccurate, add a much-needed emotional punch. The direction is a bit plodding, nothing particularly bad, but nothing exceptional either.

When watching historical films such as Khartoum, having some connection with the actual events helps bring meaning to the picture. Films based on the holocaust are often forgiven some of their cinematic sins due to the weight of the history behind the story. Yet, historical films that are not as well known can also entrance the viewer through the weight of their story. Knowing that the events actually happened often stir the viewer to greater emotional depths than a depiction of completely fictional events. It is here that Khartoum failed for me. As I said there was nothing particularly wrong with the production, but it never really captured my emotions. Admittedly I know very little about British history or the struggles of the Mid East beyond the years of my own life. This is a fault of my own, yet a film should be universal in its undertaking. If it fails to move an audience unfamiliar with its history then it will likely fall into obscurity. For those familiar with this particular history, the film may bring more to you than it did me. As for me, it was a mostly entertaining, and an interesting couple of hours in my life, it will be one that will largely be forgotten in time.