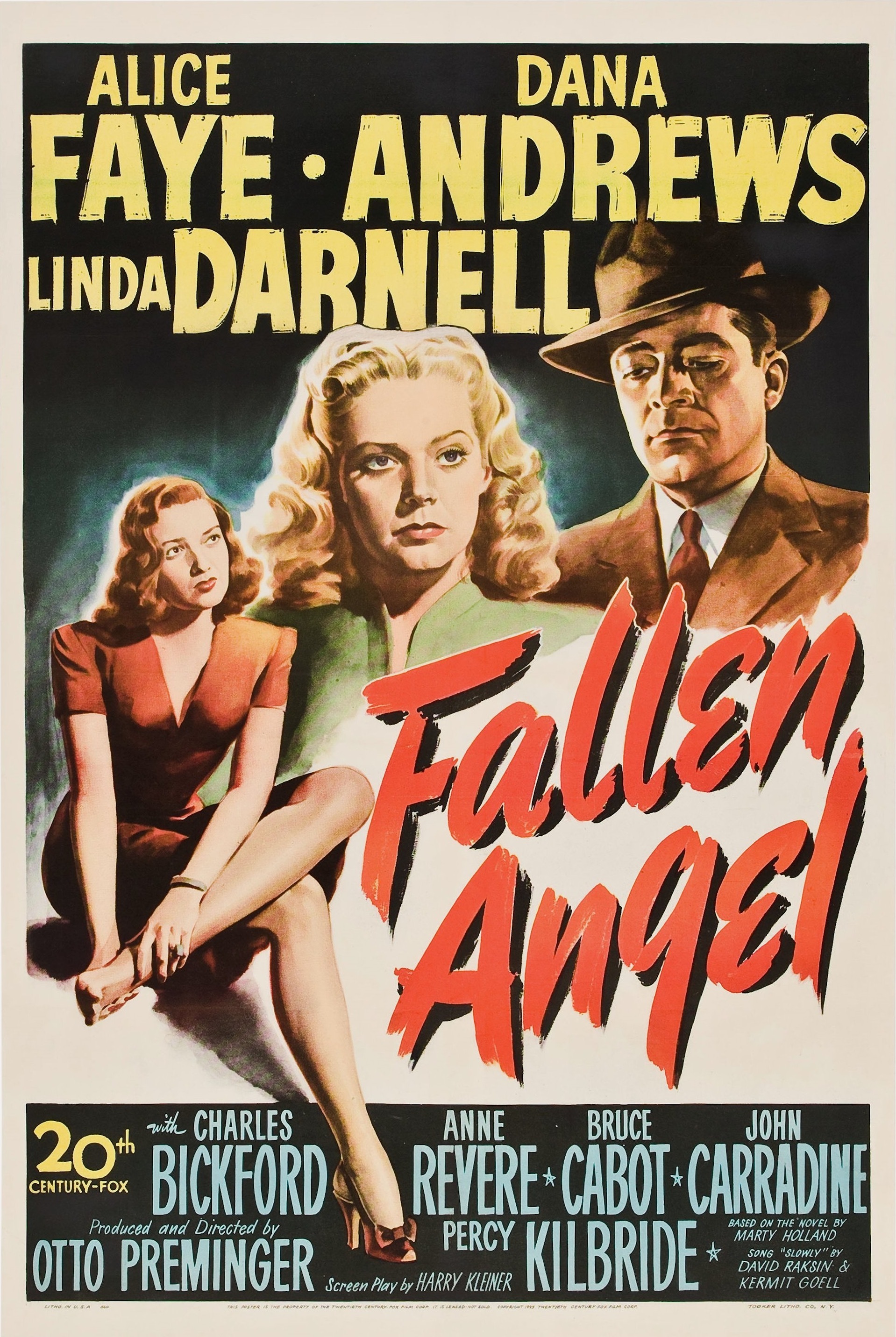 Laura the Otto Preminger film from 1944 is one of the all-time classic film noirs. It was a huge success upon its release and remains one of the genre’s most beloved films. Preminger followed it up with another noir, Fallen Angel, which also stars Dana Andrews. Here, he’s no longer a detective trying to solve a murder, but a drifter, a conman who gets into trouble he may not be able to get himself out of.

His name is Eric Stanton and he drifts into a small town called Walton because he doesn’t have the bus fare to make it to San Francisco and the driver kicks him off at the first stop once he learns Stanton doesn’t have a ticket. There he meets Stella (Linda Darnell) a beautiful, sultry waitress and like any good film noir sap, he falls immediately in love. But like any good dame in a film noir she won’t have him until he’s got some money. He figures he can get it from June (Alice Faye) a pretty, but reserved woman who hasn’t had much luck in love, but does have a lot of money.

Stanton figures she’s an easy mark. He can get lovey-dovey with her, score some cash out of her fat wallet then drop her and head back over to Stella. Naturally, things don’t go as planned and he finds himself on the run from the cops as a murder suspect.

The plot is just as complicated as Laura, but it isn’t nearly as compelling. Linda Darnell is the standout. She is radiant and mysterious. Unfortunately, she doesn’t get a ton of screen time and her character isn’t given much. Dana Andrews is fine. I love morally murky characters, especially men who think they have it all under control but are really quite clueless. Likewise, Alice Faye is perfectly acceptable but she’s missing that certain something to make this film truly great.

Well worth your time, but if you haven’t seen Laura grab that one instead. While trying to explain the type of film we were about to watch to my in-laws, my wife said it was a Rex Harrison film. I immediately began thinking that I would explain that it was a Preston Sturges film, starring Rex Harrison. Not really much difference there, when you think about it, especially since the in-laws have probably never heard of Preston Sturges or Rex Harrison, not being much for film watching.

It’s not that they are opposed to film, but rather they don’t ever go to watch movies, being too expensive, or read up on them, or study weekend grosses or any such thing. They don’t really go to rent them either. They are just not that type of folk.

I mean they still watch regular TV, no cable or satellite, and still use the internet via dial-up. They only have a DVD player because I bought them one, and only then because I was tired of watching the same old VHS tapes when we came down. And that’s just it, when we come down we watch movies, and they enjoy them. So, they aren’t opposed to movie watching, they just don’t go about seeking them out.

Anyways, I would have said it was a Preston Sturges film because when I think about movies I think more about directors than stars. Directors, it seems to me, have more of an effect on the final outcome of a film than an actor. If I had to choose, I’d go for a film with a bad actor and a great director, then a great actor and a bad director. Odds are a director can elevate a bad actor’s performance, more than an actor will elevate bad direction.

This isn’t always true, especially in older films, say starring Humphrey Bogart. I might be able to tell you who directed Casablanca if I thought about it (it’s Michael Curtiz right?) and I know that Howard Hawks directed The Big Sleep and John Huston did the Maltese Falcon. But still all of those pictures, and pretty much everything starring Humphrey Bogart is a Bogart picture to me.

This is all a convoluted way to say that I picked up a copy of Unfaithfully Yours at the library (man you’ve got to love a public library with a massive collection of excellent films) on the basis that it was a Preston Sturges film. Really, I only know Sturges because of the Coen Brothers. Their hilarious film, O’Brother, Where Art Thou? Gets its title from Sturges’s film, Sullivan’s Travels. Loving the brothers Coen and wanting to see their inspiration I rented Sullivan’s Travels and found it to be beautiful.

Preston Sturges is now on my list of directors to watch.

Unfaithfully Yours is an odd little picture. It starts out like a fast-paced comedy in the style of Bringing up Baby or His Girl Friday and then heads into surrealistic art territory before slipping over to a slapstick farce.

The plotting involves Rex Harrison starring as a celebrated English conductor, Sir Alfred De Carter, living in New York with his beautiful bride. Things are going pretty well for the old man, too. He has fame, fortune, success at something he loves, and a beautiful woman to fawn over. Sure he must put up with his petulant brother-in-law, but he’s got his wits and they are enough to take care of him.

Things turn upside down after he gets back from a trip abroad and finds out that when he told his brother-in-law to “look after” his wife, he was taken quite literally. The brother-in-law hired a private detective to look after the wife and the detective found out a few things. Mainly, that said wife spent some time in her negligee late one evening in Sir Alfred’s secretary’s bedroom.

This information naturally outrages Sir Alfred and moves our film into the surreal. During an evening concert, Sir Alfred begins to fantasize about what he will do. The camera moves into his eyeball, and into his mind.

Three fantasies of revenge, remorse, and self-loathing play out during the course of three songs that the actual Sir Alfred is conducting. During the interlude between each song, the real audience goes mad as if the music performed is the best Sir Alfred has ever conducted. Giving us some commentary on the passions and art.

When the concert is over, Sir Alfred rushes home to implement his first, and most devious fantasy – that of killing his wife and framing his secretary. But all does not go as well as the fantasy and we move into the final act, which is pure slapstick.

Nothing goes right for poor Sir Alfred, he cannot find anything, breaks everything, and is too inept to work a recording machine.  It is all perfectly paced and consists of the funniest parts of the movie.

In the end, misunderstandings are worked out and everything becomes a happy ending.

Unfaithfully Yours is an odd little film and not for everyone, as can be seen from a fairly dismal box office at the time of its release. The ever-changing tone of the film may turn some people off, but for those willing to stick it through and enjoy a film that is experimental but well made, the payoff is worth it.