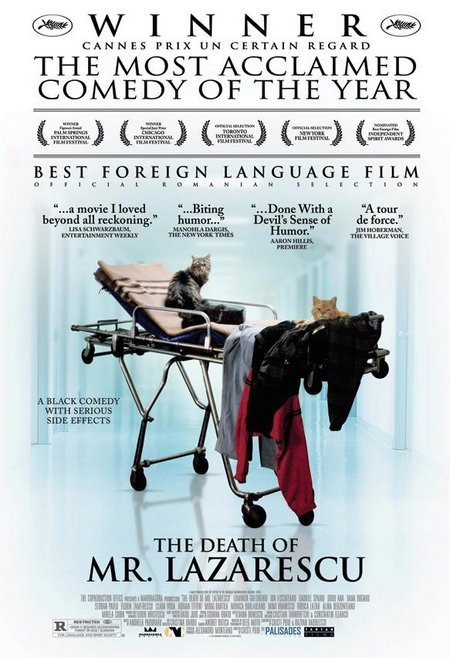 Poor Mr. Lazarescu, his wife has left him, his daughter has moved across the ocean to Canada, and his sister and brother-in-law lecture him about the money he has borrowed. He’s been having massive headaches and throwing up since morning, and the ambulance never seems to come.

And everybody chastises him for the drink.

The Death of Mr. Lazarescu is billed as a comedy, but if it is such then it is so black that I couldn’t see it. Really it is just sad, very sad, possibly the saddest movie I have ever seen.

The movie starts with Lazarescu (Ion Fiscuteanu) calling for an ambulance. We then see him call his sister, who promptly, along with her husband, yells at Lazarescu for drinking too much and asking for the return of the money he has borrowed.

Then he waits and waits for the ambulance. Eventually, he finds his way into the hall, knocking on the door of the neighbors requesting medicine.

The neighbors have mercy and nurse him to the couch where he pukes up blood. They call the ambulance again and note its more serious nature. When the nurse, Mioara Avram (Luminita Gheorghiu), arrives she finds Lazarescu in the tub, where he has fallen. She takes his vitals and tries to determine what is wrong with him.

And yells at him for the drink.

They take him to the hospital, where the doctor is extremely rude.

He chastises Lazarescu for the drink. He abuses the hospital staff, Mioara, and Lazarescu mercilessly. There is no bedside manner. Lazarescu is completely belittled for not taking care of himself properly, for the drink, for everything. The diagnosis is that it is liver failure due to the drink and tests are ordered from another hospital.

The doctors there are much kinder and run a series of tests which result in serious complications for Lazarescu. Because of a bus accident, this hospital is completely full and unable to perform the immediate surgery needed to keep Lazarescu alive.

He is taken to a third hospital.

The staff here is worse than the staff at hospital number one. Mioara tries to explain the urgency of the situation, but the doctors want to reexamine Lazarescu and spend most of their time arguing with Mioara. They then refuse to operate because a now near comatose Lazarescu doesn’t understand he needs to sign the release forms.

He is taken to a fourth hospital.

They do not chastise him for the drink and get him ready for surgery.

It is nothing short of heartbreaking.

It is shot in a documentary style. It uses natural light and lots of handheld cameras giving the film a very realistic feel.

Though it is a Romanian film, it asks plenty of questions about the state of healthcare systems around the world. It is a film that physically angers me. When doctors are more concerned about being sued and filing the proper paperwork than about caring for the ill what has gone wrong with the world?

Even the nice doctors and nurses look haggard. Long hours and extra work due to the bus accident leave them all exhausted. I’ve never thought about tired doctors, but it makes sense, they work long, hard hours and should be exhausted by the end of their shift. The healthcare workers also spend their downtime between tests and examinations chatting about personal things as if they weren’t involved in matters of life and death. It is an intimate look into the chaos, madness, and complications of caring for people.

It is a difficult film to watch. The pacing is languid and the subject matter is dark. Despite being a “comedy” there are few if any light-hearted moments. At a 153 minutes it is a large dose to swallow. Yet it is an important look at healthcare, loneliness, growing old, and how we take care of our fellow man. One that shouldn’t be missed.