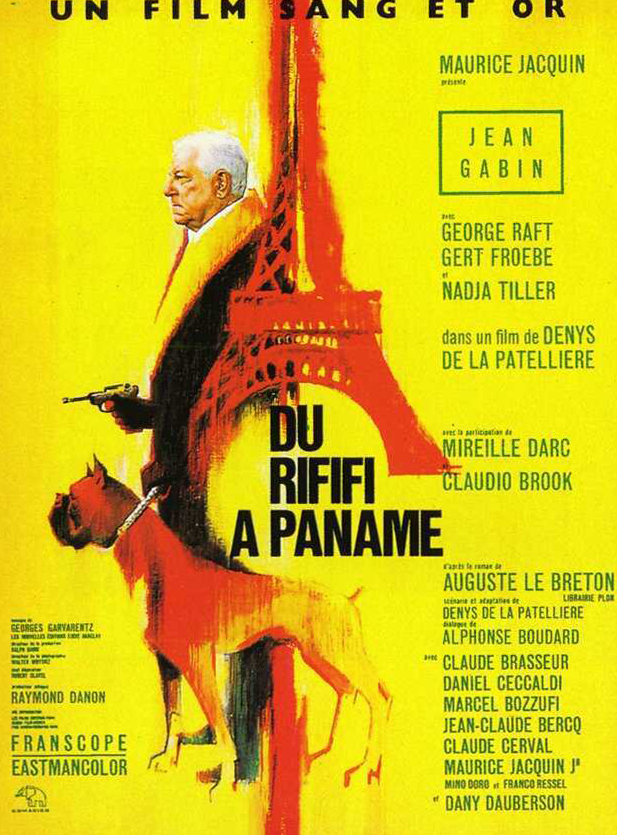 We now have a library card for the Strasbourg city library. In France, you have to pay an annual fee for a library card. There are actually two different prices, one if you wish to only check out books, and another higher priced card that allows you two check out multi-media items such as DVDs. Hearing that they had a selection of over 900 DVDs Amy and I decided we would shell out the expense of getting that type of card. We calculated that even if we only checked out one movie per week for the remaining time we are here, we would still come out cheaper than if we rented the same amount of films. The funny thing about their movies is that they almost never have any. Out of the 900 owned, there are usually only 6 or 7 of them available for check out at any time. We have been lucky that we’ve been able to find films that we would like to see. Both Rope and The Man Who Knew Too Much both came from the library.

This week I picked up Rififi in Paris thinking it was an old bank robber movie that I have heard good things about. Unfortunately, that film is entitled just Rififi. I am unsure if this is supposed to be a sequel or if it is just a coincidence in the title. There is limited information on The Internet Movie DataBase, and it wasn’t good enough to really look further than that.

The basic story of this film is that an American agent, Charles Binnagio (George Raft), is working undercover in Paris to stop a French group of gangsters. He uses his contact with a high-class hooker to start working for the gangsters by smuggling Gold to Tokyo. After saving the second-in-command mobster, Paulo Berger’s (Jean Gabin) life, Binnaggio is promoted to Berger’s bodyguard. Excitement ensues.

Due to complications involving the regional coding of the DVD I could only watch this film in an English dubbed version. I am universally opposed to dubbed movies, and try my best to only watch films in their original languages with subtitles if necessary. Watching this in the dubbed format was like slow torture. The plot was rather complicated to follow and I am not sure how much to blame on the language problem. What I was able to follow was resolutely bad.

There is no explanation why an American CIA agent would be infiltrating a group of French gangsters. There is a small subplot involving the weapons trade with Cuba, but it is not followed enough to make this the cause of the CIA’s involvement. To move the plot somewhere, a group of New York mobsters begins making threats to Berger and his cohorts to back off of several law-breaking activities. Violence ensues.

Binnaggio is so bad as an undercover agent that it is sheer movie magic that keeps him from being found out and killed. He visits the American consulate at will, talks with other agents as he pleases, and even snoops around the big boss’s house. It is surprising to see the French gang doing so well since they seem to have no ability to pay attention to their own members. The movie tries to build tension by having Binnaggio nearly found out or caught on a couple of occasions, but then the action moves forward and the enemy seems to forget. What little tension is built, always dies rather fast.

There is an odd quirk with the filming of this picture. More times than I could count there is a mirror located somewhere in the shots. Often we see one or more of the reflections of the character in the mirror, but many times we see only part of the stage. Once we even see a character’s reflection in a well-polished wall. I’m sure the filmmakers were attempting something meaningful out of all these reflections, but what that could be is beyond me. I was too busy being appalled by the sheer stupidity of the film to be bothered with such trivialities.